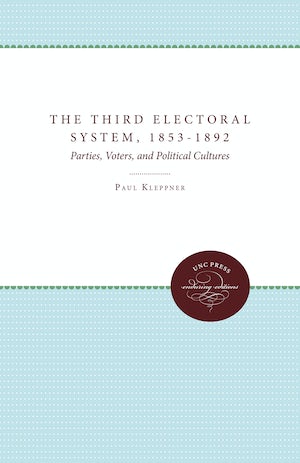 To purchase online via an independent bookstore, visit Bookshop.org
This analysis of the contours and social bases of mass voting behavior in the United States over the course of the third electoral era, from 1853 to 1892, provides a deep and rich understanding of the ways in which ethnoreligious values shaped party combat in the late nineteenth century. It was this uniquely American mode of "political confessionals" that underlay the distinctive characteristics of the era's electoral universe.

Unlike other works of this genre, this book is not confined to a single description of the voting patterns of a single state, or of a series of states in one geographic region, but cuts across states and regions, while remaining sensitive to the enormously significant ways in which political and historical context conditioned mass political behavior. The author accomplishes this remarkable fusion by weaving the small patterns evident in detailed case studies into a larger overview of the electoral system. The result is a unified conceptual framework that can be used to understand both American political behavior duing an important era and the general preconditions of social-group political consciousness. Challenging in major ways the liberal-rational assumptions that have dominated political history, the book provides the foundation for a synthesis of party tactics, organizational practices, public rhetoric, and elite and mass behaviors.

Paul Kleppner is the author of The Cross of Culture: A Social Analysis of Midwestern Politics, 1850-1900.
For more information about Paul Kleppner, visit the Author Page.