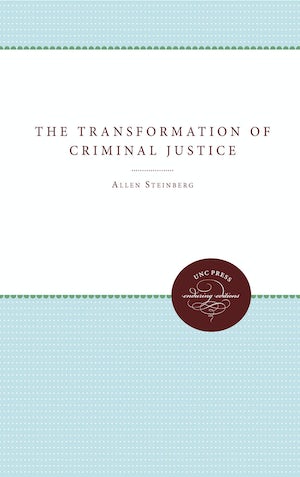 Allen Steinberg brings to life the court-centered criminal justice system of nineteenth-century Philadelphia, chronicles its eclipse, and contrasts it to the system -- dominated by the police and public prosecutor -- that replaced it. He offers a major reinterpretation of criminal justice in nineteenth-century America by examining this transformation from private to state prosecution and analyzing the discontinuity between the two systems.

Steinberg first establishes why the courts were the sources of law enforcement, authority, and criminal justice before the advent of the police. He shows how the city's system of private prosecution worked, adapted to massive social change, and came to dominate the culture of criminal justice even during the first decades following the introduction of the police. He then considers the dilemmas that prompted reform, beginning with the establishment of a professional police force and culminating in the restructuring of primary justice.

Making extensive use of court dockets, state and municipal government publications, public speeches, personal memoirs, newspapers, and other contemporary records, Steinberg explains the intimate connections between private prosecution, the everyday lives of ordinary people, and the conduct of urban politics. He ties the history of Philadelphia's criminal courts closely to related developments in the city's social and political evolution, making a contribution not only to the study of criminal justice but also to the larger literature on urban, social, and legal history.

"An important work. Joining together the history of the courts, prosecution patterns, city politics, and social developments, it convincingly demonstrates that the transformation of criminal justice was central to the development of city life itself. And that we are still haunted by its legacy."--Journal of the Early Republic