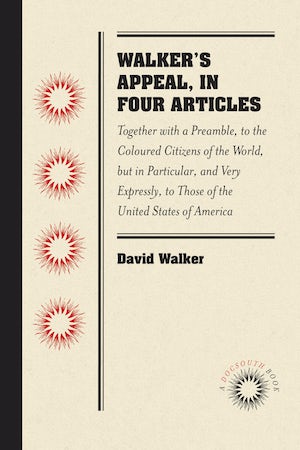 First published in 1829, Walker's Appeal called on slaves to rise up and free themselves. The two subsequent versions of his document (including the reprinted 1830 edition published shortly before Walker's death) were increasingly radical. Addressed to the whole world but directed primarily to people of color around the world, the 87-page pamphlet by a free black man born in North Carolina and living in Boston advocates immediate emancipation and slave rebellion. Walker asks the slaves among his readers whether they wouldn't prefer to "be killed than to be a slave to a tyrant." He advises them not to "trifle" if they do rise up, but rather to kill those who would continue to enslave them and their wives and children. Copies of the pamphlet were smuggled by ship in 1830 from Boston to Wilmington, North Carolina, Walker's childhood home, causing panic among whites. In 1830, members of North Carolina's General Assembly had the Appeal in mind as they tightened the state's laws dealing with slaves and free black citizens. The resulting stricter laws led to more policies that repressed African Americans, freed and slave alike.

Born in Wilmington, North Carolina, to a free mother and an enslaved father, David Walker moved to Boston in 1827 and sold secondhand clothing, aided fugitive slaves, and worked on his famous pamphlet until his mysterious death in 1830, soon after the publication of the pamphlet's third edition.
For more information about David Walker, visit the Author Page.