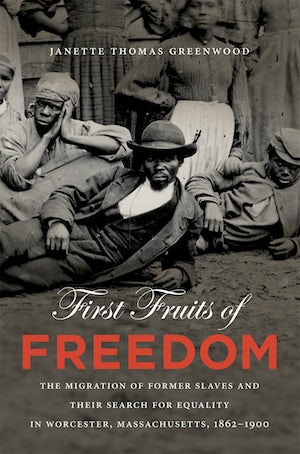 A moving narrative that offers a rare glimpse into the lives of African American men, women, and children on the cusp of freedom, First Fruits of Freedom chronicles one of the first collective migrations of blacks from the South to the North during and after the Civil War.

Janette Thomas Greenwood relates the history of a network forged between Worcester County, Massachusetts, and eastern North Carolina as a result of Worcester regiments taking control of northeastern North Carolina during the war. White soldiers from Worcester, a hotbed of abolitionism, protected refugee slaves, set up schools for them, and led them north at war's end. White patrons and a supportive black community helped many migrants fulfill their aspirations for complete emancipation and facilitated the arrival of additional family members and friends. Migrants established a small black community in Worcester with a distinctive southern flavor.

But even in the North, white sympathy did not continue after the Civil War. Despite their many efforts, black Worcesterites were generally disappointed in their hopes for full-fledged citizenship, reflecting the larger national trajectory of Reconstruction and its aftermath.

"An important contribution to a previously neglected topic."--H-Civil War

"This study may serve as a window on the migration north of a specific group of freedmen and the degree to which they became integrated into a new community. . . . Highly recommended."--Choice

"A magisterial narrative that tells an incredibly moving and often tragic story about Reconstruction."--Projo.com

“A valuable case study for American migration.”--Journal of Enterprise & Society

"This is a wonderfully human and humanized story. Not only does Greenwood achieve a holistic interweaving of usually separated stories, but she also brings characters to life in each segment and keeps them in focus over the course of decades. In North Carolina and then in Worcester, in war and then in peace, Greenwood peoples her story with those who embodied the freedom struggles of the second half of the nineteenth century. Her literary skill and human empathy bring us to know and care about her subjects."--Sydney Nathans, Emeritus, Duke University

Read: Janette Thomas Greenwood is interviewed by Brian Kelly at the After Slavery blog. (02/21/2013)