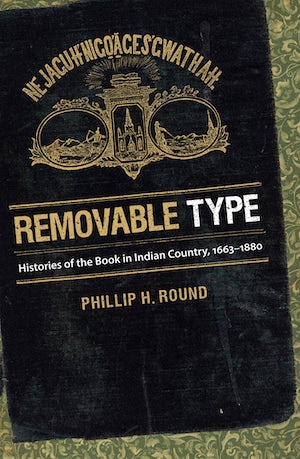 In 1663, the Puritan missionary John Eliot, with the help of a Nipmuck convert whom the English called James Printer, produced the first Bible printed in North America. It was printed not in English but in Algonquian, making it one of the first books printed in a Native language. In this ambitious and multidisciplinary work, Phillip Round examines the relationship between Native Americans and printed books over a two-hundred-year period, uncovering the individual, communal, regional, and political contexts for Native peoples' use of the printed word. From the northeastern woodlands to the Great Plains, Round argues, alphabetic literacy and printed books mattered greatly in the emergent, transitional cultural formations of indigenous nations threatened by European imperialism.

Removable Type showcases the varied ways that Native peoples produced and utilized printed texts over time, approaching them as both opportunity and threat. Surveying this rich history, Round addresses such issues as the role of white missionaries and Christian texts in the dissemination of print culture in Indian Country, the establishment of "national" publishing houses by tribes, the production and consumption of bilingual texts, the importance of copyright in establishing Native intellectual sovereignty (and the sometimes corrosive effects of reprinting thereon), and the significance of illustrations.

Phillip H. Round is professor of English and American Indian and Native studies at the University of Iowa.
For more information about Phillip H. Round, visit the Author Page.

"Explores how native peoples came to adopt a European weapon, namely the printed word, as both a means to defend themselves from the actions of the United States and as a way to preserve their culture. . . . Highly recommended."--Library Journal

"Round's important study demonstrates and confirms that Native Americans had an intellectual interest in European alphabetic literacy from very early in the colonial relationship. . . . Well researched and effectively presented. . . . Recommended."--Choice

“A landmark study that presents a new genealogy of early American book history, one in which American Indians secured intellectual sovereignty and constitutional rights by scripting indigenous sign systems into the printed world.”--Modern Philology

"Removable Type opens up an entirely new approach to Native American texts and creates a compelling and exciting argument about the role of the book and of print culture in Indian Country. This is a groundbreaking book with detailed, original, and sophisticated analysis."--Hilary E. Wyss, author of Writing Indians: Literacy, Christianity, and Native Community in Early America

"Painstakingly researched, deeply conversant with the fields it will impact, and engagingly argued and written, Removable Type will be a landmark in early Native literary studies and in early American book history. Round generates a set of scholarly questions that will keep people coming back to this book for a long while."--Robert Warrior, author of The People and the Word: Reading Native Nonfiction