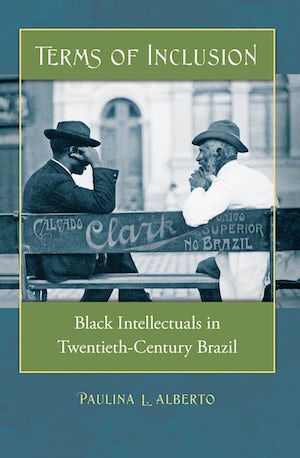 In this history of black thought and racial activism in twentieth-century Brazil, Paulina Alberto demonstrates that black intellectuals, and not just elite white Brazilians, shaped discourses about race relations and the cultural and political terms of inclusion in their modern nation.

Drawing on a wide range of sources, including the prolific black press of the era, and focusing on the influential urban centers of São Paulo, Rio de Janeiro, and Salvador da Bahia, Alberto traces the shifting terms that black thinkers used to negotiate their citizenship over the course of the century, offering fresh insight into the relationship between ideas of race and nation in modern Brazil. Alberto finds that black intellectuals' ways of engaging with official racial discourses changed as broader historical trends made the possibilities for true inclusion appear to flow and then recede. These distinct political strategies, Alberto argues, were nonetheless part of black thinkers' ongoing attempts to make dominant ideologies of racial harmony meaningful in light of evolving local, national, and international politics and discourse. Terms of Inclusion tells a new history of the role of people of color in shaping and contesting the racialized contours of citizenship in twentieth-century Brazil.

“This book is truly an important work. It will no doubt take its place as one of the standard sources on the history of black activism in Brazil.”--The Americas

"Terms of Inclusion provides the rich historical context of black activism and identity struggles and should be read thoroughly by anyone interested in Brazilian history, contemporary debates over affirmative action policies in Brazil, or comparative race relations between the United States and Brazil."--HAHR

"Based on impeccable scholarship, this well-organized and gracefully written book provides a much more complex, subtle, and nuanced picture of Afro-Brazilian activists and their movements than any previous work. A very welcome, important addition to research on race in Latin America."--George Reid Andrews, author of Blackness in the White Nation: A History of Afro-Uruguay

"Paulina Alberto's book tells two important stories. First, it examines how Afro-Brazilian intellectuals used race-based movements to negotiate positions within Brazilian national identity during the twentieth century. Second, by moving between the cities of São Paulo, Rio de Janeiro, and Salvador da Bahia, Alberto is able to gauge both the national and regional nature of 'race' in a country where the word, and all the baggage that is attached to it, is uniquely up for grabs."--Jeffrey Lesser, author of A Discontented Diaspora: Japanese-Brazilians and the Meanings of Ethnic Militancy