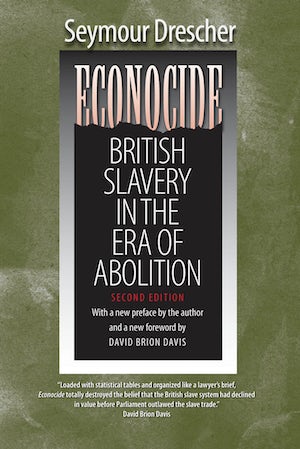 To purchase online via an independent bookstore, visit Bookshop.org
In this classic analysis and refutation of Eric Williams's 1944 thesis, Seymour Drescher argues that Britain's abolition of the slave trade in 1807 resulted not from the diminishing value of slavery for Great Britain but instead from the British public's mobilization against the slave trade, which forced London to commit what Drescher terms "econocide." This action, he argues, was detrimental to Britain's economic interests at a time when British slavery was actually at the height of its potential.

Originally published in 1977, Drescher's work was instrumental in undermining the economic determinist interpretation of abolitionism that had dominated historical discourse for decades following World War II. For this second edition, which includes a foreword by David Brion Davis, Drescher has written a new preface, reflecting on the historiography of the British slave trade since this book's original publication.

Praise for the First Edition

"As thoroughgoing and elegant a piece of revisionism in the best sense as has appeared anywhere in the discipline in recent years."--David Eltis, Business History Review

"A model of clarity and economy, Drescher's tightly argued and persuasive book is a frontal assault upon the decline theory of abolitionism."--Jack P. Greene, Agricultural History

"Seymour Drescher has enjoyed a long and distinguished career as a specialist of European colonial slavery, the slave trade and abolitionism, and especially of the role played by Great Britain in these processes."--Lawrence C. Jennings, Journal of Modern History

"[Drescher] showed how abolitionism was an important part of popular culture in Britain at that time, commanding support from people who had no economic interest in the matter one way or the other."--Stephen Davies, The Freeman: Ideas on Liberty

"The most direct and enduring challenge to the 'Williams Thesis' runs through the influential publications of Seymour Drescher."--Matt D. Childs, H-Net Reviews