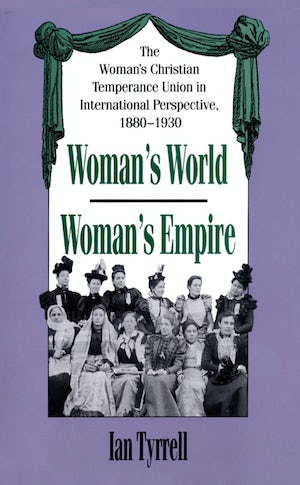 To purchase online via an independent bookstore, visit Bookshop.org
Frances Willard founded the Woman's Christian Temperance Union in 1884 to carry the message of women's emancipation throughout the world. Based in the United States, the WCTU rapidly became an international organization, with affiliates in forty-two countries. Ian Tyrrell tells the extraordinary story of how a handful of women sought to change the mores of the world -- not only by abolishing alcohol but also by promoting peace and attacking prostitution, poverty, and male control of democratic political structures.

In describing the work of Mary Leavitt, Jessie Ackermann, and other temperance crusaders on the international scene, Tyrrell identifies the tensions generated by conflict between the WCTU's universalist agenda and its own version of an ideologically and religiously based form of cultural imperialism. The union embraced an international and occasionally ecumenical vision that included a critique of Western materialism and imperialism. But, at the same time, its mission inevitably promoted Anglo-American cultural practices and Protestant evangelical beliefs deemed morally superior by the WCTU.

Tyrrell also considers, from a comparative perspective, the peculiar links between feminism, social reform, and evangelical religion in Anglo-American culture that made it so difficult for the WCTU to export its vision of a woman-centered mission to other cultures. Even in other Western states, forging links between feminism and religiously based temperance reform was made virtually impossible by religious, class, and cultural barriers. Thus, the WCTU ultimately failed in its efforts to achieve a sober and pure world, although its members significantly shaped the values of those countries in which it excercised strong influence.

As and urgently needed history of the first largescale worldwide women's organization and non-denominational evangelical institution, Woman's World / Woman's Empire will be a valuable resource to scholars in the fields of women's studies, religion, history, and alcohol and temperance studies.

Ian Tyrrell is Scientia Professor of History at the University of New South Wales. His previous books include Sobering Up: From Temperance to Prohibition in Antebellum America, 1800-1860.


For more information about Ian Tyrrell, visit the Author Page.

"Tyrrell's study of the international outreach of the WCTU sheds important new light on a significant episode in the history of American religion and social reform."--The Christian Century

"This is a remarkably fine book. It is the first modern, scholarly history of the Woman's Christian Temperance Union as a worldwide organization. With dazzling breadth, Tyrrell has exhausted little-used manuscripts in America, England, and Australia. Marshaling these materials in a persuasive analysis, Tyrrell tells the fascinating story of women organizing for the first time on a global basis--against alcohol and for evangelical Christianity and women's rights."--W. J. Rorabaugh, University of Washington