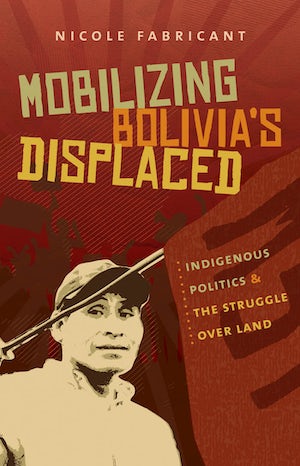 The election of Evo Morales as Bolivia’s president in 2005 made him his nation's first indigenous head of state, a watershed victory for social activists and Native peoples. El Movimiento Sin Tierra (MST), or the Landless Peasant Movement, played a significant role in bringing Morales to power. Following in the tradition of the well-known Brazilian Landless movement, Bolivia’s MST activists seized unproductive land and built farming collectives as a means of resistance to large-scale export-oriented agriculture. In Mobilizing Bolivia’s Displaced, Nicole Fabricant illustrates how landless peasants politicized indigeneity to shape grassroots land politics, reform the state, and secure human and cultural rights for Native peoples.

Fabricant takes readers into the personal spaces of home and work, on long bus rides, and into meetings and newly built MST settlements to show how, in response to displacement, Indigenous identity is becoming ever more dynamic and adaptive. In addition to advancing this rich definition of indigeneity, she explores the ways in which Morales has found himself at odds with Indigenous activists and, in so doing, shows that Indigenous people have a far more complex relationship to Morales than is generally understood.

"Of interest to all social scientists. Recommended. All levels/libraries."--Choice

“Engaging, clearly written, and based on solid empirical observations. The book makes an important contribution to the regional literature. . . [and] fills a gap in a growing field of study.”--Journal of the Royal Anthropological Institute

"A beautifully written book about citizenship that is an ethnography of globalization as well as a sharp contribution to debates about indigeneity."--Andrew Canessa, University of Essex

"Rich and important. As Fabricant tells the political history of this social movement, she provides insight into all that is Bolivia--Evo Morales, indigenous politics, regional divides--and then links that story to the politics, economics, and culture of everyday life. A work of huge relevance for the whole region."--Steve Striffler, University of New Orleans