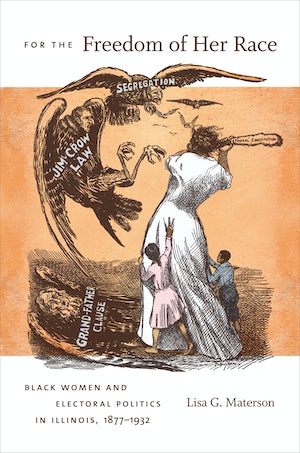 Grounded in the rich history of Chicago politics, For the Freedom of Her Race tells a wide-ranging story about black women's involvement in southern, midwestern, and national politics. Examining the oppressive decades between the end of Reconstruction in 1877 and the election of Franklin Delano Roosevelt in 1932--a period that is often described as the nadir of black life in America--Lisa Materson shows that as African American women migrated beyond the reach of southern white supremacists, they became active voters, canvassers, suffragists, campaigners, and lobbyists, mobilizing to gain a voice in national party politics and elect representatives who would push for the enforcement of the Reconstruction Amendments in the South.

Lisa G. Materson is associate professor of history at the University of California at Davis.
For more information about Lisa G. Materson, visit the Author Page.

"The book is exhaustively researched, meticulously analyzed, and does justice to the complex ways that those who are politically motivated function inside the limitations of a two-party system."--The Journal of American History

"One of this book's many strengths is that Materson takes her subjects seriously as political actors."--American Historical Review

"Makes an important contribution to our understanding of the role of African-American women within Jim Crow era politics."--Southwest Journal of Cultures

"Convincingly demonstrates that black women were agents of social and political change, and carefully traces the post-emancipation experiences of southern black women who used the political process to gain political rights for all blacks."--Journal of Illinois History

"Well-organized, nicely written, and makes an important contribution to our knowledge of African American women's history and politics, and to our understanding of the sometimes messy and complicated processes by which political realignments occur."--Indiana Magazine of History