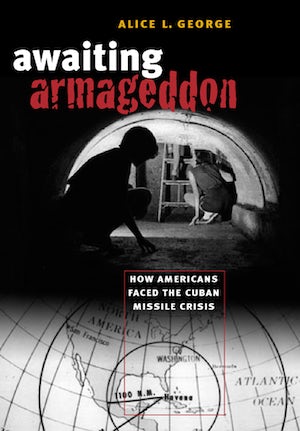 For thirteen days in October 1962, America stood at the brink of nuclear war. Nikita Khrushchev's decision to place nuclear missiles in Cuba and John F. Kennedy's defiant response introduced the possibility of unprecedented cataclysm. The immediate threat of destruction entered America's classrooms and its living rooms. Awaiting Armageddon provides the first in-depth look at this crisis as it roiled outside of government offices, where ordinary Americans realized their government was unprepared to protect either itself or its citizens from the dangers of nuclear war.

During the seven days between Kennedy's announcement of a naval blockade and Khrushchev's decision to withdraw Soviet nuclear missiles from Cuba, U.S. citizens absorbed the nightmare scenario unfolding on their television sets. An estimated ten million Americans fled their homes; millions more prepared shelters at home, clearing the shelves of supermarkets and gun stores. Alice George captures the irrationality of the moment as Americans coped with dread and resignation, humor and pathos, terror and ignorance.

In her examination of the public response to the missile crisis, the author reveals cracks in the veneer of American confidence in the early years of the space age and demonstrates how the fears generated by Cold War culture blinded many Americans to the dangers of nuclear war until it was almost too late.

Alice L. George is a historian and former newspaper editor who lives in Philadelphia, Pennsylvania.
For more information about Alice L. George, visit the Author Page.

"[An] admirable social history . . . especially notable for its portrayal of how children were traumatized. . . . George skillfully demonstrates that the crisis was inflamed by the Cold War culture. . . . [A] first-rate investigation . . . Strongly recommended."--Library Journal

"Alice George succeeds in exploring a neglected aspect of the much-studied Cuban missile crisis. By showing how the average American responded to the threat of Soviet missiles in Cuba, her book fills an important gap in the scholarly literature."--Robert A. Divine, University of Texas at Austin

"Awaiting Armageddon tells how Americans who were not decision-makers perceived and responded to the most dangerous crisis in our history. It enriches the story wonderfully."--Ernest May, Harvard University