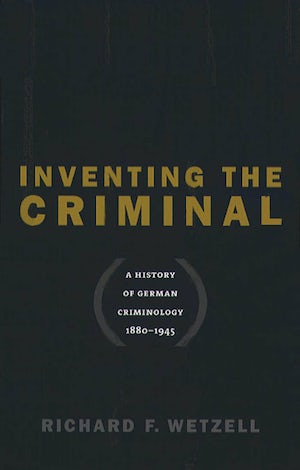 Recent years have witnessed a resurgence of biological research into the causes of crime, but the origins of this kind of research date back to the late nineteenth century. Here, Richard Wetzell presents the first history of German criminology from Imperial Germany through the Weimar Republic to the end of the Third Reich, a period that provided a unique test case for the perils associated with biological explanations of crime.

Drawing on a wealth of primary sources from criminological, legal, and psychiatric literature, Wetzell shows that German biomedical research on crime predominated over sociological research and thus contributed to the rise of the eugenics movement and the eventual targeting of criminals for eugenic measures by the Nazi regime. However, he also demonstrates that the development of German criminology was characterized by a constant tension between the criminologists' hereditarian biases and an increasing methodological sophistication that prevented many of them from endorsing the crude genetic determinism and racism that characterized so much of Hitler's regime. As a result, proposals for the sterilization of criminals remained highly controversial during the Nazi years, suggesting that Nazi biological politics left more room for contention than has often been assumed.

"Wetzell has added to this new historical literature on particular realms of German life under Nazism with a book that investigates the history of the discipline of criminology from the late nineteenth century to the end of World War II. . . . Wetzell's book is solidly researched and clearly organized and written."--American Historical Review

"A tremendous accomplishment. . . . No serious researcher in the area can afford to ignore it."--Journal of Modern History

"Firmly based on a vast array of both juridical and medical sources, Inventing the Criminal makes a major contribution to our knowledge of criminological discourse. It ought to be read both by students of modern Germany and by anyone who is interested in the development of attitudes toward deviant behavior."--Andrew Lees, Rutgers University

"Wetzell's elegantly argued book offers a provocative but convincing history of the fate of biological determinism in Germany--a story which turns out to be much more complicated than we thought. Exploring the claims of penal reformers, criminal psychiatrists, lawyers, doctors, and politicians, Inventing the Criminal shows that even under the Nazis, scholars remained uncomfortable with the idea that individuals could be 'born criminals.' If Wetzell is right--and his carefully analyzed evidence suggests that he is--we will need to revise substantially our picture of the continuities and discontinuities in the history of German science."--Suzanne Marchand, Louisiana State University