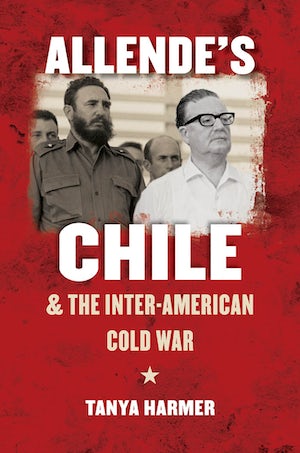 Fidel Castro described Salvador Allende's democratic election as president of Chile in 1970 as the most important revolutionary triumph in Latin America after the Cuban revolution. Yet celebrations were short lived. In Washington, the Nixon administration vowed to destroy Allende's left-wing government while Chilean opposition forces mobilized against him. The result was a battle for Chile that ended in 1973 with a right-wing military coup and a brutal dictatorship lasting nearly twenty years.

Tanya Harmer argues that this battle was part of a dynamic inter-American Cold War struggle to determine Latin America's future, shaped more by the contest between Cuba, Chile, the United States, and Brazil than by a conflict between Moscow and Washington. Drawing on firsthand interviews and recently declassified documents from archives in North America, Europe, and South America--including Chile's Foreign Ministry Archive--Harmer provides the most comprehensive account to date of Cuban involvement in Latin America in the early 1970s, Chilean foreign relations during Allende's presidency, Brazil's support for counterrevolution in the Southern Cone, and the Nixon administration's Latin American policies. The Cold War in the Americas, Harmer reveals, is best understood as a multidimensional struggle, involving peoples and ideas from across the hemisphere.

Tanya Harmer is lecturer in international history at the London School of Economics.
For more information about Tanya Harmer, visit the Author Page.

"Tanya Harmer, in Allende's Chile and the Inter-American Cold War, wants to set aside arguments over who was at fault for any particular Cold War episode. Instead, she considers the broader context."--London Review of Books

“Writers will look to Harmer’s book as a model for scholarship on the inter-American experience.”--Journal of American History

"[A] carefully researched, creative, highly original, well-crafted, well-written, thoughtful insertion of Chile's story into the global and inter-American history of the Cold War. Of the hundreds of volumes on my bookshelves on Chile, I would not want to be without this one. No serious student of the Popular Unity government in Chile should fail to read Harmer's account."--American Historical Review

“Harmer’s is an insightful contribution to the study of Chile and of bilateral and multilateral relations in the Americas.”--Latin American Perspectives

“This study brings to life the struggle over Chile as waged by the Chilean and other governments alike.”--European Review of Latin American and Caribbean Studies

Read the author's guest posts at the UNC Press blog.

Learn more about Harmer's work and her current research.