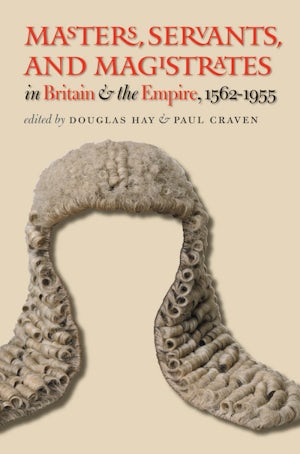 Master and servant acts, the cornerstone of English employment law for more than four hundred years, gave largely unsupervised, inferior magistrates wide discretion over employment relations, including the power to whip, fine, and imprison men, women, and children for breach of private contracts with their employers. The English model was adopted, modified, and reinvented in more than a thousand colonial statutes and ordinances regulating the recruitment, retention, and discipline of workers in shops, mines, and factories; on farms, in forests, and on plantations; and at sea. This collection presents the first integrated comparative account of employment law, its enforcement, and its importance throughout the British Empire.

Sweeping in its geographic and temporal scope, this volume tests the relationship between enacted law and enforced law in varied settings, with different social and racial structures, different economies, and different constitutional relationships to Britain. Investigations of the enforcement of master and servant law in England, the British Caribbean, India, Africa, Hong Kong, Canada, Australia, and colonial America shed new light on the nature of law and legal institutions, the role of inferior courts in compelling performance, and the definition of "free labor" within a multiracial empire.

Douglas Hay is associate professor of law and history at York University. He is coauthor of Eighteenth-Century English Society and coeditor of Policing and Prosecution in Britain, 1750-1850.
For more information about Douglas Hay, visit the Author Page.

Paul Craven is associate professor of labor studies at York University. He is editor of Labouring Lives: Work and Workers in Nineteenth-Century Ontario and author of An Impartial Umpire: Industrial Relations and the Canadian State, 1900-1911.
For more information about Paul Craven, visit the Author Page.

"A growing amount of attention has been paid to the question of master and servant legislation in England. . . . Masters, Servants, and Magistrates is the most important work so far and significantly extends our knowledge and understanding of this body of law."--Historical Studies in Industrial Relations

"Aptly . . . demonstrates the ways a group of medieval laws, created to serve the needs of a small country, could be reworked into a flexible system of employment procedures across a vast empire. . . . A valuable contribution to the areas of social history, legal history, and economic history."--Itinerario

"A rich and varied volume. . . . Turns the history of employment on its head."--Law and History Review

"The planning, organization and scope of the book are impressive. . . . [Masters, Servants and Magistrates in Britain and the Empire] is a seminal work which current and future scholars in the field will quarry and remain heavily indebted to for many years to come."--Labour History

"Masters, Servants, and Magistrates is a monumental achievement that contributes immeasurably to our understanding of several important subjects, including the history of employment law, the process of statutory 'borrowing,' and the practices of low-level magistrates."--Comparative Labor Law & Policy Journal

"This is a big and important book that should prove invaluable reading for historians of both law and empire."--H-Albion