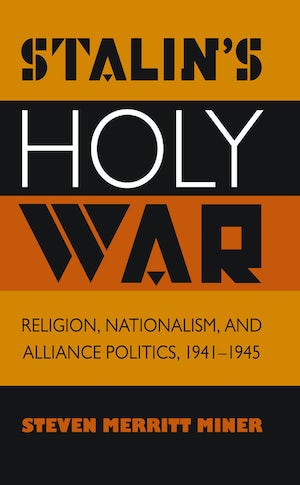 Histories of the USSR during World War II generally portray the Kremlin's restoration of the Russian Orthodox Church as an attempt by an ideologically bankrupt regime to appeal to Russian nationalism in order to counter the mortal threat of Nazism. Here, Steven Merritt Miner argues that this version of events, while not wholly untrue, is incomplete. Using newly opened Soviet-era archives as well as neglected British and American sources, he examines the complex and profound role of religion, especially Russian Orthodoxy, in the policies of Stalin's government during World War II.

Miner demonstrates that Stalin decided to restore the Church to prominence not primarily as a means to stoke the fires of Russian nationalism but as a tool for restoring Soviet power to areas that the Red Army recovered from German occupation. The Kremlin also harnessed the Church for propaganda campaigns aimed at convincing the Western Allies that the USSR, far from being a source of religious repression, was a bastion of religious freedom. In his conclusion, Miner explores how Stalin's religious policy helped shape the postwar history of the USSR.

Steven Merritt Miner is professor of history at Ohio University in Athens, Ohio. He is author of Between Churchill and Stalin: The Soviet Union, Great Britain, and the Origins of the Grand Alliance.

"A penetrating book on the complex and profound role of religion, especially Russian Orthodoxy, in the policies of Stalin's government during World War II. . . . His examination sheds light on the origins of the Cold War and of the Soviet Union's implosion in 1991. He is also able to refute some revisionist scholars, who argue that Stalin was not really an ideologue, but a 'Red Tsar' or a practitioner of realpolitik."--Catholic Historical Review

"Steven Miner's book helps to explain why Soviet authorities never managed to stamp out religious belief among the peoples of the U.S.S.R. Focusing on the World War II experience, Miner documents a remarkable gap between decisions made at the top and policies implemented at lower levels, even under Stalin. The result is one of the most significant reassessments of Soviet history since the Cold War ended."--John Lewis Gaddis, Yale University