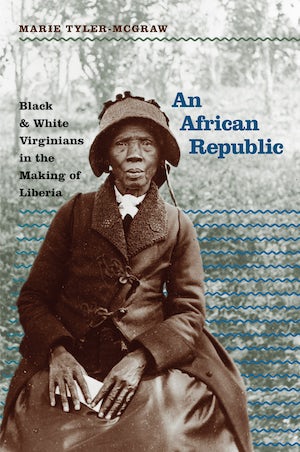 The nineteenth-century American Colonization Society (ACS) project of persuading all American free blacks to emigrate to the ACS colony of Liberia could never be accomplished. Few free blacks volunteered, and greater numbers would have overwhelmed the meager resources of the ACS. Given that reality, who supported African colonization and why? No state was more involved with the project than Virginia, where white Virginians provided much of the political and organizational leadership and black Virginians provided a majority of the emigrants.

An African Republic follows the experiences of the emigrants from Virginia to Liberia, where some became the leadership class, consciously seeking to demonstrate black abilities, while others found greater hardship and early death. Tyler-McGraw carefully examines the tensions between racial identities, domestic visions, and republican citizenship in Virginia and Liberia.

Marie Tyler-McGraw is an independent historian and public history consultant. She is author of At the Falls: Richmond, Virginia, and Its People (from the University of North Carolina Press).
For more information about Marie Tyler-McGraw, visit the Author Page.

"[A] promising addition to the ongoing discussion of the economics of migration."--Journal of the Early Republic

"An informative and insightful narrative that thoroughly explains the complications and desires surrounding Liberian colonization."--H-Net Reviews

"This provocative, well-researched book makes a significant contribution to the study of early Liberian growth. . . . Scholars as well as students of African studies will find this book a welcome interpretation toward reevaluation of the formative period of Liberia."-- Register of the Kentucky Historical Society

"An excellent book that demonstrates that the ACS was consequential; the body not only established Liberia, it also highlighted the debates on slavery in Virginia."--Journal of American History

"[A] valuable book."--Journal of Interdisciplinary History