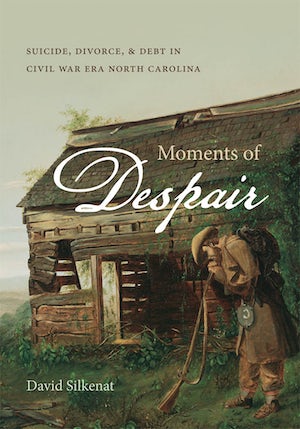 During the Civil War era, black and white North Carolinians were forced to fundamentally reinterpret the morality of suicide, divorce, and debt as these experiences became pressing issues throughout the region and nation. In Moments of Despair, David Silkenat explores these shifting sentiments.

Antebellum white North Carolinians stigmatized suicide, divorce, and debt, but the Civil War undermined these entrenched attitudes, forcing a reinterpretation of these issues in a new social, cultural, and economic context in which they were increasingly untethered from social expectations. Black North Carolinians, for their part, used emancipation to lay the groundwork for new bonds of community and their own interpretation of social frameworks. Silkenat argues that North Carolinians' attitudes differed from those of people outside the South in two respects. First, attitudes toward these cultural practices changed more abruptly and rapidly in the South than in the rest of America, and second, the practices were interpreted through a prism of race. Drawing upon a robust and diverse body of sources, including insane asylum records, divorce petitions, bankruptcy filings, diaries, and personal correspondence, this innovative study describes a society turned upside down as a consequence of a devastating war.

"It is not often I find a social history that is fun to read, one that grabs my attention and holds it the way a good battle history can. This book manages to do that while being very informative and giving the reader an understanding of these issues in North Carolina."--TOCWOC: A Civil War Blog

"This excellent book is a social history of the changing attitudes toward Suicide, Divorce, and Debt. . . . It is a fun and informative read."--TOCWOC--A Civil War Blog

"To have a better rounded education on our American Civil War; you should consider adding this very interesting book to your library." --Lone Star Book Review

“A valuable contribution to our understanding of how the American Civil War affected the lives of ordinary people.”--Journal of Interdisciplinary History