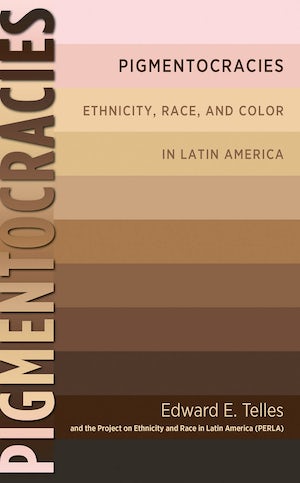 Pigmentocracies--the fruit of the multiyear Project on Ethnicity and Race in Latin America (PERLA)--is a richly revealing analysis of contemporary attitudes toward ethnicity and race in Brazil, Colombia, Mexico, and Peru, four of Latin America's most populous nations. Based on extensive, original sociological and anthropological data generated by PERLA, this landmark study analyzes ethnoracial classification, inequality, and discrimination, as well as public opinion about Afro-descended and indigenous social movements and policies that foster greater social inclusiveness, all set within an ethnoracial history of each country. A once-in-a-generation examination of contemporary ethnicity, this book promises to contribute in significant ways to policymaking and public opinion in Latin America.

Edward Telles, PERLA's principal investigator, explains that profound historical and political forces, including multiculturalism, have helped to shape the formation of ethnic identities and the nature of social relations within and across nations. One of Pigmentocracies’s many important conclusions is that unequal social and economic status is at least as much a function of skin color as of ethnoracial identification. Investigators also found high rates of discrimination by color and ethnicity widely reported by both targets and witnesses. Still, substantial support across countries was found for multicultural-affirmative policies--a notable result given that in much of modern Latin America race and ethnicity have been downplayed or ignored as key factors despite their importance for earlier nation-building.

“Telles and his team have laid a data baseline useful in the continuing quest for the what, how, and why of Latin American racism.”--Choice

“An excellent source of scholarly and official ethnoracial histories and contexts.”--American Anthropologist

“Arises from a large multicountry comparative survey of Brazil, Colombia, Mexico, and Peru, coordinated by Telles, who is known for his research on Brazil and among Mexican Americans.”--Latin American Research Review

"Pigmentocracies is a signal achievement in the comparative sociology of race and racism, punctuating Edward Telles's already distinctive and pioneering research on racial and ethno-national classification and categorization. In providing and unpacking multicountry data, Pigmentocracies' conclusions highlight the relationship between identification and inequality often obscured in both nationalist and scholarly explanations of racial exceptionalism, with implications for both North and South America."--Michael Hanchard, The Johns Hopkins University

"This book breaks new ground with its rigorous comparative approach, which reveals the variety of Latin American attitudes towards and perceptions of racial difference, and with its systematic use of questionnaire data, which allow many standard ideas about race in Latin American countries to be tested in detail--and confirmed in some cases, but challenged in others. Indispensable reading for all scholars and students of race and ethnicity in Latin America."--Peter Wade, University of Manchester

"Based on imaginative, meticulous, and ambitious comparative research, this pathbreaking book shatters the traditional indigenous-black divide and takes the study of race, color, ethnicity, and mestizaje in Latin America to a whole new level. A must read."--Alejandro de la Fuente, Harvard University