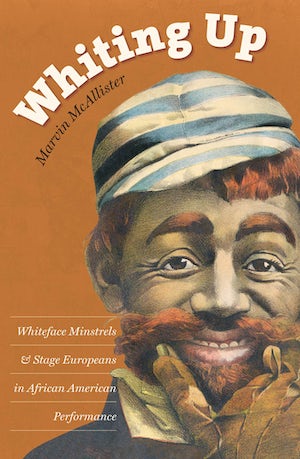 In the early 1890s, black performer Bob Cole turned blackface minstrelsy on its head with his nationally recognized whiteface creation, a character he called Willie Wayside. Just over a century later, hiphop star Busta Rhymes performed a whiteface supercop in his hit music video "Dangerous." In this sweeping work, Marvin McAllister explores the enduring tradition of "whiting up," in which African American actors, comics, musicians, and even everyday people have studied and assumed white racial identities.

Not to be confused with racial "passing" or derogatory notions of "acting white," whiting up is a deliberate performance strategy designed to challenge America's racial and political hierarchies by transferring supposed markers of whiteness to black bodies--creating unexpected intercultural alliances even as it sharply critiques racial stereotypes. Along with conventional theater, McAllister considers a variety of other live performance modes, including weekly promenading rituals, antebellum cakewalks, solo performance, and standup comedy. For over three centuries, whiting up as allowed African American artists to appropriate white cultural production, fashion new black identities through these "white" forms, and advance our collective ability to locate ourselves in others.

Marvin McAllister is assistant professor of English and African American studies at the University of South Carolina and author of White People Do Not Know How to Behave at Entertainments Designed for Ladies and Gentlemen of Colour: William Brown's African and American Theater. He has worked as a dramaturg for theatrical productions in New York, Chicago, the District of Columbia, and Seattle.
For more information about Marvin McAllister, visit the Author Page.

“Whiting Up . . . interrogates the many contributions of African Americans to popular American entertainment.”--Journal of American History

“Discusses a fascinating and understudied segment of race in America. . . . Adds a welcome layer of complexity.”--H-South

“A compelling and highly readable study that makes a valuable contribution to our understanding of racial identity in American popular entertainment.”--Journal of American Studies

"Ambitious in scope, meticulously researched, and written in a thoroughly engaging style, Whiting Up is a much-needed cultural analysis of African-American whiteface performance--cakewalks, Sunday promenades, acting, and comedy shows--from the late eighteenth century to the present. This book will have a major impact on cultural studies, performance studies, African American studies, critical race studies, and literary criticism."--Malini Johar Schueller, University of Florida, author of Locating Race: Global Sites of Post-Colonial Citizenship and U.S. Orientalisms: Race, Nation and Gender in Literature, 1790–1890

"In this exciting new book, Marvin McAllister rewardingly investigates the fascinating theatrical history of what he terms 'whiting up.' Moving from the colonial and antebellum periods to contemporary solo performance and standup comedy, McAllister deftly constructs a genealogy of black performers in whiteface and of black actors playing white identified characters. He reveals how these performers and performances potently contribute to the ongoing dialogue on the relationship between race and representation. Whiting Up is an important and bold study that provides critical insight into how race has been and continues to be performed."--Harry J. Elam Jr., Stanford University 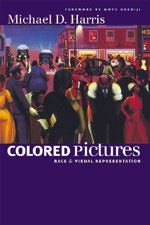