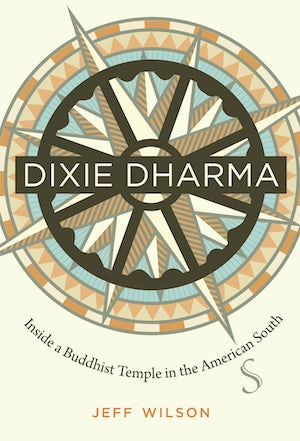 Buddhism in the United States is often viewed in connection with practitioners in the Northeast and on the West Coast, but in fact, it has been spreading and evolving throughout the United States since the mid-nineteenth century. In Dixie Dharma, Jeff Wilson argues that region is crucial to understanding American Buddhism. Through the lens of a multidenominational Buddhist temple in Richmond, Virginia, Wilson explores how Buddhists are adapting to life in the conservative evangelical Christian culture of the South, and how traditional Southerners are adjusting to these newer members on the religious landscape.

Introducing a host of overlooked characters, including Buddhist circuit riders, modernist Pure Land priests, and pluralistic Buddhists, Wilson shows how regional specificity manifests itself through such practices as meditation vigils to heal the wounds of the slave trade. He argues that southern Buddhists at once use bodily practices, iconography, and meditation tools to enact distinct sectarian identities even as they enjoy a creative hybridity.

“Wilson presents an impressive view of a plural Buddhism finding a place in the midst of the evangelical South.”--Religion in American History

“This will be enlightening and well worth reading by those specializing in religious studies or interested in American regional cultures.”--Library Journal

“Wilson’s highly readable study is an excellent, much-needed contribution to American religious history in general, and in particular to the study of American Buddhism. . . . Highly recommended. Lower-level undergraduates and above; general readers.”--Choice

“The power of this book is that for the first time . . . we are given access to the actual experiences of people practicing Buddhism in the South.”--Buddhadarma

“An important reminder that while broad studies of religious identity are important, they must be seasoned with ethnographic views from below. . . . Graduate students looking for dissertation project should consult Wilson’s forward facing conclusion.”--Sociology of Religion