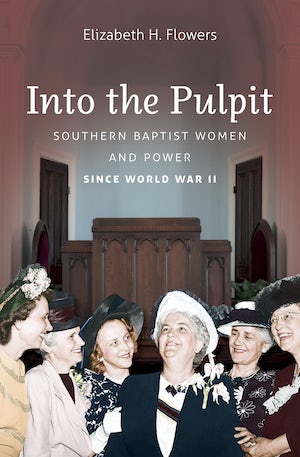 To purchase online via an independent bookstore, visit Bookshop.org
The debate over women's roles in the Southern Baptist Convention's conservative ascendance is often seen as secondary to theological and biblical concerns. Elizabeth Flowers argues, however, that for both moderate and conservative Baptist women--all of whom had much at stake--disagreements that touched on their familial roles and ecclesial authority have always been primary. And, in the turbulent postwar era, debate over their roles caused fierce internal controversy. While the legacy of race and civil rights lingered well into the 1990s, views on women's submission to male authority provided the most salient test by which moderates were identified and expelled in a process that led to significant splits in the Church. In Flowers's expansive history of Southern Baptist women, the "woman question" is integral to almost every area of Southern Baptist concern: hermeneutics, ecclesial polity, missionary work, church-state relations, and denominational history.

Flowers's analysis, part of the expanding survey of America's religious and cultural landscape after World War II, points to the South's changing identity and connects religious and regional issues to the complicated relationship between race and gender during and after the civil rights movement. She also shows how feminism and shifting women's roles, behaviors, and practices played a significant part in debates that simmer among Baptists and evangelicals throughout the nation today.

“[Into the Pulpit] places a topic of acute contemporary concern in long historical perspective.”--Christian Century

“[A] concise and well-constructed history. . . . The contextual research of the book is impressive.”--H-South

“A sound study.”--Journal of American History