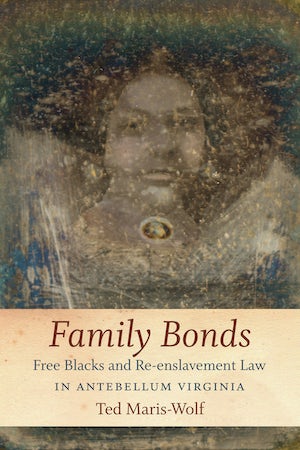 To purchase online via an independent bookstore, visit Bookshop.org
Between 1854 and 1864, more than a hundred free African Americans in Virginia proposed to enslave themselves and, in some cases, their children. Ted Maris-Wolf explains this phenomenon as a response to state legislation that forced free African Americans to make a terrible choice: leave enslaved loved ones behind for freedom elsewhere or seek a way to remain in their communities, even by renouncing legal freedom. Maris-Wolf paints an intimate portrait of these people whose lives, liberty, and use of Virginia law offer new understandings of race and place in the upper South. Maris-Wolf shows how free African Americans quietly challenged prevailing notions of racial restriction and exclusion, weaving themselves into the social and economic fabric of their neighborhoods and claiming, through unconventional or counterintuitive means, certain basic rights of residency and family. Employing records from nearly every Virginia county, he pieces together the remarkable lives of Watkins Love, Jane Payne, and other African Americans who made themselves essential parts of their communities and, in some cases, gave up their legal freedom in order to maintain family and community ties.

Ted Maris-Wolf is a historian at The Colonial Williamsburg Foundation.
For more information about Ted Maris-Wolf, visit the Author Page.

“Using biographical and legal scholarship, Maris-Wolf thoughtfully re-engages historical debates about slavery in Virginia and areas on its periphery and about the meanings of law, liberty, and race in the antebellum US.”--Choice

“Maris-Wolf’s enthralling stories . . . remind even the most jaded scholars that the most peculiar things about the antebellum world are the varied ways that whites and blacks, slaves and free people, experienced slavery.”--Journal of Southern History

“A masterful, detailed account of a significant issue in black-white relationships in antebellum Virginia.”--The Historian

"Maris-Wolf breaks new ground in the study of free African Americans in the antebellum South, challenging previous scholars’ interpretations of why, at the height of pre–Civil War repression, free black Americans chose to enslave themselves. His style is smart, engaging, and grounded in social history, making Family Bonds a pleasure to read."--Martha S. Jones, author of All Bound Up Together: The Woman Question in African American Public Culture, 1830–1900

"The depth of the research here is remarkable and enthralling. This is the first study of its kind and makes a strong contribution to what we know about the meaning of liberty, freedom, and slavery."--Loren Schweninger, University of North Carolina at Greensboro