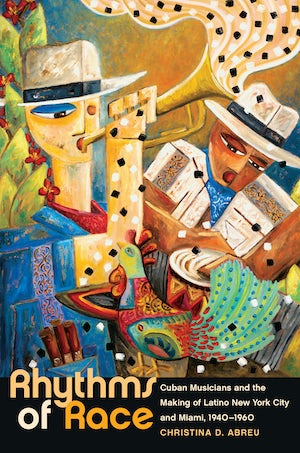 Among the nearly 90,000 Cubans who settled in New York City and Miami in the 1940s and 1950s were numerous musicians and entertainers, black and white, who did more than fill dance halls with the rhythms of the rumba, mambo, and cha cha chá. In her history of music and race in midcentury America, Christina D. Abreu argues that these musicians, through their work in music festivals, nightclubs, social clubs, and television and film productions, played central roles in the development of Cuban, Afro-Cuban, Latino, and Afro-Latino identities and communities. Abreu draws from previously untapped oral histories, cultural materials, and Spanish-language media to uncover the lives and broader social and cultural significance of these vibrant performers.

Keeping in view the wider context of the domestic and international entertainment industries, Abreu underscores how the racially diverse musicians in her study were also migrants and laborers. Her focus on the Cuban presence in New York City and Miami before the Cuban Revolution of 1959 offers a much needed critique of the post-1959 bias in Cuban American studies as well as insights into important connections between Cuban migration and other twentieth-century Latino migrations.

Christina D. Abreu is associate professor of history and director of the Center for Latino/Latin American Studies at Northern Illinois University.
For more information about Christina D. Abreu, visit the Author Page.

“A fascinating account of an understudied form of labor migration in an equally understudied period of U.S. immigration history.”--American Historical Review

“Makes significant contributions to pan-ethnic studies about Cubans and Latinos in the United States.”--Journal of American History

“This significant study helps elucidate the multiple evolving meanings of Cubanidad and Latino/a identity in the US.”--CHOICE

“Demonstrates that Cuban musicians and diverse audiences shaped what it meant not just to be (Afro) Cuban but also Latin or Hispanic within the United States.”--Florida Historical Quarterly

“A very thoroughly researched work and the first to deal deeply with the topic, Abreu’s book is a very necessary contribution to Cuban and Latino scholarship.”--International Migration Review

“A valuable addition to the Latino music-making historiography.”--Journal of Southern History