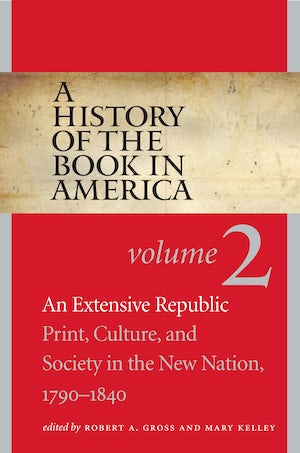 Volume Two of A History of the Book in America documents the development of a distinctive culture of print in the new American republic.

Between 1790 and 1840 printing and publishing expanded, and literate publics provided a ready market for novels, almanacs, newspapers, tracts, and periodicals. Government, business, and reform drove the dissemination of print. Through laws and subsidies, state and federal authorities promoted an informed citizenry. Entrepreneurs responded to rising demand by investing in new technologies and altering the conduct of publishing. Voluntary societies launched libraries, lyceums, and schools, and relied on print to spread religion, redeem morals, and advance benevolent goals. Out of all this ferment emerged new and diverse communities of citizens linked together in a decentralized print culture where citizenship meant literacy and print meant power. Yet in a diverse and far-flung nation, regional differences persisted, and older forms of oral and handwritten communication offered alternatives to print. The early republic was a world of mixed media.

Robert A. Gross, University of Connecticut

Maris A. Vinovskis, University of Michigan

Robert A. Gross is James L. and Shirley A. Draper Professor of Early American History at the University of Connecticut. He is author of The Minutemen and Their World.
For more information about Robert A. Gross, visit the Author Page.

Mary Kelley is Ruth Bordin Collegiate Professor of History, American Culture, and Women's Studies at the University of Michigan. She is author or editor of several books, including Learning to Stand and Speak: Women, Education, and Public Life in America's Republic (UNC Press).
For more information about Mary Kelley, visit the Author Page.

"With thirty-two contributors, this volume is a feat of compilation and editing."--Times Literary Supplement

"These superb essays convey the extraordinary range of possibilities in Americans’ interactions with print between 1790 and 1840."--Journal of American History

"The scholarship is up-to-date in every way, as the contributors (many leading scholars on their subject) look at every facet--human and machine--of producing the written word. . . . Gross and Kelley provide lucid, helpful overviews in their introductions to the book as a whole and to its six sections. No other single book offers such a rich and comprehensive analysis of how the written word helped shape antebellum America, and the series as a whole is magnificent. . . . Essential."--Choice

"Has a remarkable unity of voice, its sections elegantly knitted together by thoughtful introductions. . . . Both lay and academic readers . . . [will] be rewarded with the feeling of truly understanding the era, benefiting from both broad strokes and fine details."--Library Journal

"A model of scholarly publication and institutional cooperation. . . . A timely achievement and a great one. . . . Without university presses, we would still be waiting for HBA."--Journal of Scholarly Publishing

"The decision to plumb as many themes of print culture as possible, coupled with the skillful use of various rhetorical devices . . . has produced a volume that meets the challenge of coming to grips with a history of American printing that is more variegated than in any other society or culture of the period. . . . Eminently successful, and as in all good history it flings open doors for new avenues of research and understanding." --Printing History