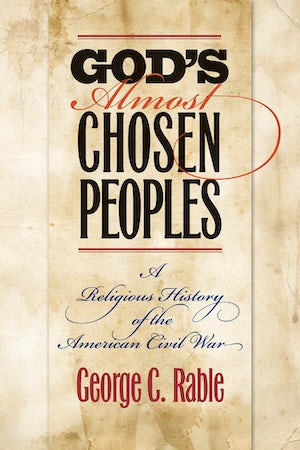 Throughout the Civil War, soldiers and civilians on both sides of the conflict saw the hand of God in the terrible events of the day, but the standard narratives of the period pay scant attention to religion. Now, in God's Almost Chosen Peoples, Lincoln Prize-winning historian George C. Rable offers a groundbreaking account of how Americans of all political and religious persuasions used faith to interpret the course of the war.

Examining a wide range of published and unpublished documents--including sermons, official statements from various churches, denominational papers and periodicals, and letters, diaries, and newspaper articles--Rable illuminates the broad role of religion during the Civil War, giving attention to often-neglected groups such as Mormons, Catholics, blacks, and people from the Trans-Mississippi region. The book underscores religion's presence in the everyday lives of Americans north and south struggling to understand the meaning of the conflict, from the tragedy of individual death to victory and defeat in battle and even the ultimate outcome of the war. Rable shows that themes of providence, sin, and judgment pervaded both public and private writings about the conflict. Perhaps most important, this volume--the only comprehensive religious history of the war--highlights the resilience of religious faith in the face of political and military storms the likes of which Americans had never before endured.

George C. Rable holds the Charles G. Summersell Chair in Southern History at the University of Alabama. He is author of Civil Wars: Women and the Crisis of Southern Nationalism, The Confederate Republic: A Revolution against Politics, and Fredericksburg! Fredericksburg!, which won the Lincoln Prize.
For more information about George C. Rable, visit the Author Page.

"Religion in the Civil War has been an understudied subject, but Rable’s thorough study goes a long way toward rectifying the neglect. . . . A heroic feat of research."--James M. McPherson, New York Review of Books

"Brilliant and groundbreaking. . . . Rable's engrossing study of the role of religion in the Civil War will stand as the definitive religious history of America's most divisive conflict."--Publishers Weekly, starred review

"An excellent analysis. . . . Stands out for its accessibility and thorough research. . . . Highly recommended for readers of Civil War history or American religious history."--Library Journal

"Rable’s sweeping book synthesizes a massive amount of primary source material and provides a narrative that unfolds as intensely as the war it chronicles."--Journal of American History

"God's Almost Chosen Peoples is one of the most significant books published in recent years on a Civil War subject. Impeccably researched and gracefully written, it fills a significant void in the historiography of the conflict….God's Almost Chosen Peoples should stand for years as the definitive work on religion and the Civil War. The author's research is meticulous, his narrative flowing, and his judgments sound. Dr. Rable's important book is recommended without reservation."--Blue and Gray Magazine

"Until George C. Rable's God's Almost Chosen Peoples . . . an exploration of the role of religion has been strangely absent from the standard histories of the sectional conflict."--Foreword Magazine