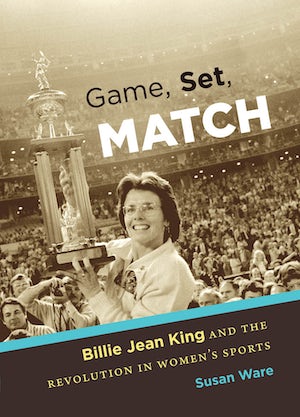 When Billie Jean King trounced Bobby Riggs in tennis's "Battle of the Sexes" in 1973, she placed sports squarely at the center of a national debate about gender equity. In this winning combination of biography and history, Susan Ware argues that King's challenge to sexism, the supportive climate of second-wave feminism, and the legislative clout of Title IX sparked a women's sports revolution in the 1970s that fundamentally reshaped American society.

While King did not single-handedly cause the revolution in women's sports, she quickly became one of its most enduring symbols, as did Title IX, a federal law that was initially passed in 1972 to attack sex discrimination in educational institutions but had its greatest impact by opening opportunities for women in sports. King's place in tennis history is secure, and now, with Game, Set, Match, she can take her rightful place as a key player in the history of feminism as well. By linking the stories of King and Title IX, Ware explains why women's sports took off in the 1970s and demonstrates how giving women a sporting chance has permanently changed American life on and off the playing field.

Susan Ware specializes in twentieth-century U.S. history, women's history, and biography. In addition to acting as general editor of American National Biography, she serves as Senior Advisor to the Schlesinger Library on the History of Women in America at the Radcliffe Institute for Advanced Study, Harvard University.
For more information about Susan Ware, visit the Author Page.

"A book that works on multiple levels. . . . Cogently argues that the passage of Title IX may actually have impeded the creation of a level playing field. It's a tribute to how much has changed that much of the book's content will be shocking to readers under 30; it's also a measure of how much remains to be done, given the 'separate but equal' approach that still dominates sports today."--Kirkus Reviews

"A great read. . . . Ware sews together the histories of women's sports and feminism, using feminist icon Billie Jean King as the thread. Particularly compelling is her recounting of the tennis star's battle with her own homophobia and that of society."--Ms.

"If you read one book, make it: Game, Set, Match. . . . As Susan Ware's biography of her shows, King's fight against sexism in sports might be her biggest accomplishment."--Shape

"In Game, Set, Match: Billie Jean King and the Revolution in Women's Sports, the role of a pioneer and much of the leveling legislation she inspired--namely the NCAA's title IX provisions--is gamely told by women's history scholar Susan Ware."--Publishers Weekly

"Ware astutely places King at the vortex of the change in women's rights, gay causes . . . and sports professionalism, leaving no doubt about King's place in 20th-century women's sports."--Library Journal

Read: Ware's interview with Claire Potter at the blog Tenured Radical, on the 40th anniversary of the Battle of the Sexes.

Read: In another guest blog post, Ware illustrates why the USTA has graced an important national facility with Billie Jean King’s trailblazing name. Read "A Plaque for Billie Jean." (9/2/2011)

Read: Ware also looks at King’s ties to Wimbledown where she was a singles champion 6 times and how the female players before and after her have shaped the tournament and the game. Read "There Will Always Be a Wimbledon." (6/20/2011)