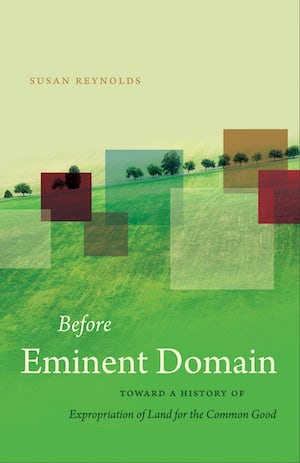 In this concise history of expropriation of land for the common good in Europe and North America from medieval times to 1800, Susan Reynolds contextualizes the history of an important legal doctrine regarding the relationship between government and the institution of private property.

Before Eminent Domain concentrates on western Europe and the English colonies in America. As Reynolds argues, expropriation was a common legal practice in many societies in which individuals had rights to land. It was generally accepted that land could be taken from them, with compensation, when the community, however defined, needed it. She cites examples of the practice since the early Middle Ages in England, France, Germany, Italy, and Spain, and from the seventeenth century in America.

Reynolds concludes with a discussion of past and present ideas and assumptions about community, individual rights, and individual property that underlie the practice of expropriation but have been largely ignored by historians of both political and legal thought.

"[A] little gem of a book. . . . Stimulating and thought provoking."--Law and History Review

“A daring attempt to question some of the received ideas about rights and obligations in the Middle Ages.”--European Review of History

"This is a fascinating book. Reynolds demonstrates that before the seventeenth century, expropriation of land was quite common and relatively uncontroversial so long as it was done for what was perceived to be the common or public utility and so long as compensation was paid. Reynolds advances the state of current literature by conducting a European-wide survey of the practice of expropriation from the ninth through the eighteenth centuries. No one, so far as I know, has ever done that before."--Charles Donahue Jr., Harvard Law School

"This is the first serious study of the origins of land expropriation for the common good in the western world. The standard story is that the practice began with Grotius, but Reynolds pushes the date back significantly and shows that the origin of the practice is much more complex than is usually understood. This is a bold, original argument, and Reynolds has the evidence to back it up. She tells a long-neglected story and does so with great clarity and care."--Gregory S. Alexander, Cornell Law School