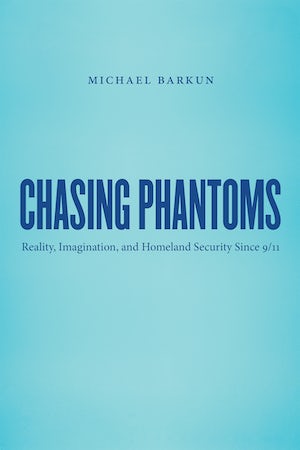 Although a report by the congressionally mandated Commission on the Prevention of Weapons of Mass Destruction, Proliferation, and Terrorism concluded that biological or nuclear weapons were very likely to be unleashed in the years soon after 2001, what Americans actually have experienced are relatively low-tech threats. Yet even under a new administration, extraordinary domestic and international policies enacted by the U.S. government in the wake of 9/11 remain unchanged. Political scientist and former FBI consultant Michael Barkun argues that a nonrational, emotion-driven obsession with dangers that cannot be seen has played and continues to play an underrecognized role in sustaining the climate of fear that drives the U.S. "war on terror."

Barkun identifies a gap between the realities of terrorism--"violence without a return address"--and the everyday discourse about it among government officials and the general public. Demonstrating that U.S. homeland security policy reflects significant nonrational thinking, Barkun offers new recommendations for effective--and rational--policymaking.

Michael Barkun is professor emeritus of political science at the Maxwell School of Syracuse University and is a former FBI consultant in domestic terrorism cases. He is author of five previous books, including Religion and the Racist Right: The Origins of the Christian Identity Movement.
For more information about Michael Barkun, visit the Author Page.

"Convincingly lays out powerful arguments. . . . Scholars, students, and policy makers will find much to ponder in this rigorous examination of homeland security and its demons."--Publishers Weekly

"A cascade of keen concepts about invisible powers, coercive re-enchantment, apocalyptic sensibility, disaster obsessions, reverse transparency, landscapes of fear, moral panic, security theater, and government restructuring rituals. Sharp points about centralized-control vs. emergent-behavior narratives, and how experts shape them. Plus sage advice for a proportional conception of terrorism and homeland security."--David Ronfeldt, co-author Networks and Netwars: The Future of Terror, Crime, and Militancy

"Chasing Phantoms is a very impressive, original, and well-written discussion of Americans' ability to understand terrorism after 9/11. Barkun opens our eyes to the reality of terrorism versus the imagined threat of terrorism. This is a must-read."--David Rapoport, editor of Terrorism: Critical Concepts in Political Science

"Michael Barkun displays a powerful understanding of the atmosphere of panic created in the aftermath of 9/11. Taking a new and illuminating approach to that day, he reveals how the 9/11 attacks were interpreted by various observers and what that has meant for the United States, as well as the rest of the world."--Leonard Weinberg, author of Global Terrorism: A Beginner's Guide

"Michael Barkun lays out the historical and social contexts for understanding the post–9/11 climate of fear in the United States, putting controversial issues of contemporary public discussion into a historically rich and theoretically sound framework. His scholarship is impeccable."--Mark Juergensmeyer, author of Terror in the Mind of God: The Global Rise of Religious Violence