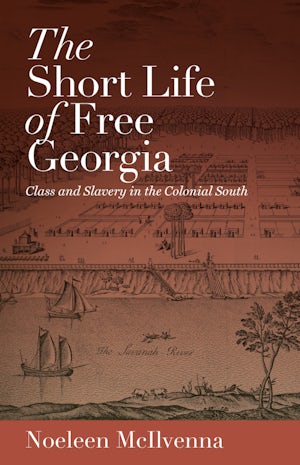 To purchase online via an independent bookstore, visit Bookshop.org
For twenty years in the eighteenth century, Georgia--the last British colony in what became the United States--enjoyed a brief period of free labor, where workers were not enslaved and were paid. The Trustees for the Establishment of the Colony of Georgia created a "Georgia experiment" of philanthropic enterprise and moral reform for poor white workers, though rebellious settlers were more interested in shaking off the British social system of deference to the upper class. Only a few elites in the colony actually desired the slave system, but those men, backed by expansionist South Carolina planters, used the laborers' demands for high wages as examples of societal unrest. Through a campaign of disinformation in London, they argued for slavery, eventually convincing the Trustees to abandon their experiment.

In The Short Life of Free Georgia, Noeleen McIlvenna chronicles the years between 1732 and 1752 and challenges the conventional view that Georgia's colonial purpose was based on unworkable assumptions and utopian ideals. Rather, Georgia largely succeeded in its goals--until self-interested parties convinced England that Georgia had failed, leading to the colony's transformation into a replica of slaveholding South Carolina.

Noeleen McIlvenna is professor of history at Wright State University and author of A Very Mutinous People.
For more information about Noeleen McIlvenna, visit the Author Page.

“Successfully demonstrates that class, not race, was the defining component of early Georgian society.”--Choice

“McIlvenna’s expert comparative analysis of primary sources allows for a complex picture to emerge. . . . Social history at its finest, and certainly the first book of its kind to point a lens at the complex political, social, and economic climate that marked early free Georgia.”--Augusta Genealogy

“McIlvenna tells a complex, multilayerd story of Georgia’s beginning in six chronological chapters that include details from a wide range of primary sources.”--Journal of Southern History

“A retelling of the thirteenth colony’s trustee era (1732-1752) from the standpoint of the settlement’s poor, white, and socially irreverent majority.”--Journal of American History

“Provide[s] valuable accounts of the development of the economy of early Georgia.”--New Perspectives on the Eighteenth Century