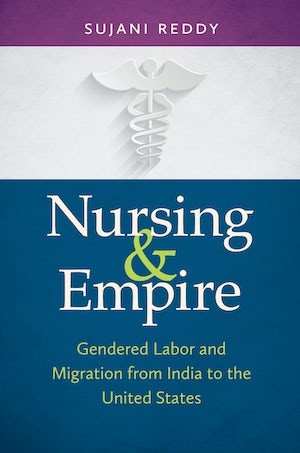 In this rich interdisciplinary study, Sujani Reddy examines the consequential lives of Indian nurses whose careers have unfolded in the contexts of empire, migration, familial relations, race, and gender. As Reddy shows, the nursing profession developed in India against a complex backdrop of British and U.S. imperialism. After World War II, facing limited vocational options at home, a growing number of female nurses migrated from India to the United States during the Cold War. Complicating the long-held view of Indian women as passive participants in the movement of skilled labor in this period, Reddy demonstrates how these "women in the lead" pursued new opportunities afforded by their mobility. At the same time, Indian nurses also confronted stigmas based on the nature of their "women's work," the religious and caste differences within the migrant community, and the racial and gender hierarchies of the United States.

Drawing on extensive archival research and compelling life-history interviews, Reddy redraws the map of gender and labor history, suggesting how powerful global forces have played out in the personal and working lives of professional Indian women.

“This exciting global history documents the nineteenth- and twentieth-century development of the nursing profession in India, charts the Indian nurse diaspora in the second half of the twentieth century, and contemplates the opportunities and limitations of their mobility in the United States. . . . The focus on nursing and migration from India to the United States is clear and compelling. . . . Will be of interest to students, scholars, and policy makers in nursing, Asian American, and immigration studies.”--Journal of American History

“A valuable resource for many scholars. . . . An important work contributing to an intersectional analysis of gender, migration, and care, as well as the history of nursing.”--Labour/Le Travail

"In this beautifully written and brilliantly argued book, Sujani Reddy demonstrates the urgency of understanding Indian nurse migration to the United States in relation to the many reconfigurations of ‘Anglo-American capitalist imperialism’ over two centuries. This is an indispensable and groundbreaking contribution to the history of women and labor migration, and it sets a new standard for the global study of imperialism, capitalism, and race."--Jennifer Guglielmo, author of Living the Revolution

"Sujani Reddy neatly traces the development of modern racialized nursing practices by going beyond simply analyzing migration to examining the historical emergence of nursing in India and the United States. Nursing and Empire explores labor markets, intimate industries, and gender with a writing style that is simultaneously deeply analytical and richly descriptive. An absolutely exciting and one-of-a-kind book."--Sharmila Rudrappa, University of Texas at Austin

Get chapter details, author event information, and more at the Facebook page facebook.com/nursingempire.