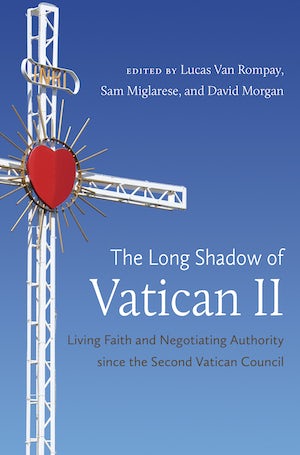 With the Second Vatican Council (1962–65), the Roman Catholic Church for the first time took a positive stance on modernity. Its impact on the thought, worship, and actions of Catholics worldwide was enormous. Benefiting from a half century of insights gained since Vatican II ended, this volume focuses squarely on the ongoing aftermath and reinterpretation of the Council in the twenty-first century. In five penetrating essays, contributors examine crucial issues at the heart of Catholic life and identity, primarily but not exclusively within North American contexts. On a broader level, the volume as a whole illuminates the effects of the radical changes made at Vatican II on the lived religion of everyday Catholics.

As framed by volume editors Lucas Van Rompay, Sam Miglarese, and David Morgan, the book's long view of the church's gradual and often contentious transition into contemporary times profiles a church and laity who seem committed to many mutual values but feel that implementation of the changes agreed to in principle at the Council is far from accomplished. The election in 2013 of the charismatic Pope Francis has added yet another dimension to the search for the meaning of Vatican II.

Sam Miglarese is adjunct instructor of religious studies and education and director of community engagement at Duke University.
For more information about Sam Miglarese, visit the Author Page.

“An important analysis of the Roman Catholic Church in the modern world, the Church’s impact on the world, and vice versa.”--Library Journal

“Provide[s] scholarly assessments of the impact of the Council’s work in subsequent years.”--Choice

“A fascinating study of conciliar reception in material culture. . . . Combine[s] conventional theological scholarship with more empirical and ethnographic sources to demonstrate the ambiguity and promise of the Council for the Church today.”--Catholic Historical Review

"The Long Shadow of Vatican II will take its place as one of the most intelligent assessments of the Council's effect on its fiftieth anniversary. It successfully locates the Council in the history of not only the 1960s but its turbulent and unpredictable aftermath."--John McGreevy, University of Notre Dame

"An illuminating contribution to the effort to figure out what happened after Vatican II. The timing of this volume could not be more fortuitous: the election of Pope Francis has now introduced a significant inflection in the post-Vatican II world. Whether that inflection eventually turns out to have been a blip, a pause, a turning point, or a revolution remains to be seen. But however brief or long, the new chapter alters the postconciliar story, and this collection will assist many readers trying to reread the past half century in light of it."--Stephen Schloesser, Loyola University Chicago

"Given the changes that the still-new pope may have in mind, this book, focused on the aftermath of the Second Vatican Council, contributes to understanding real, on-the-ground Catholic religious practice in North America."--James O'Toole, Boston College