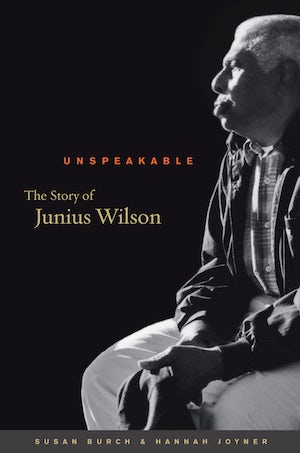 Junius Wilson (1908-2001) spent seventy-six years at a state mental hospital in Goldsboro, North Carolina, including six in the criminal ward. He had never been declared insane by a medical professional or found guilty of any criminal charge. But he was deaf and black in the Jim Crow South. Unspeakable is the story of his life.

Using legal records, institutional files, and extensive oral history interviews--some conducted in sign language--Susan Burch and Hannah Joyner piece together the story of a deaf man accused in 1925 of attempted rape, found insane at a lunacy hearing, committed to the criminal ward of the State Hospital for the Colored Insane, castrated, forced to labor for the institution, and held at the hospital for more than seven decades. Junius Wilson's life was shaped by some of the major developments of twentieth-century America: Jim Crow segregation, the civil rights movement, deinstitutionalization, the rise of professional social work, and the emergence of the deaf and disability rights movements. In addition to offering a bottom-up history of life in a segregated mental institution, Burch and Joyner's work also enriches the traditional interpretation of Jim Crow by highlighting the complicated intersections of race and disability as well as of community and language.

This moving study expands the boundaries of what biography can and should be. There is much to learn and remember about Junius Wilson--and the countless others who have lived unspeakable histories.

Susan Burch has taught history at Gallaudet University; Charles University, Czech Republic; and the University of Aberdeen, Scotland. She is author of Signs of Resistance: American Deaf Cultural History, 1900 to World War II.
For more information about Susan Burch, visit the Author Page.

Hannah Joyner is an independent scholar and author of From Pity to Pride: Growing Up Deaf in the Old South.
For more information about Hannah Joyner, visit the Author Page.

“A heart-rending story of race and disability in the Jim Crow South.”--American History

“[A] brisk and compelling narrative that proves surprisingly uplifting.”--Star News

“Riveting.”--Journal of Blacks in Higher Education

"An engrossing and insightful look at changes in how race and disability have been viewed from the perspective of one man's life."--Booklist

“With Unspeakable, Susan Burch and Hannah Joyner reveal a gruesome picture of official abuse and neglect. In simple, powerful language, they describe the life of Wilson, who spent 76 years in the State Hospital, apparently for no other reason than that he was deaf. . . . In understated language, Burch and Joyner describe his evolution from a confused, frightened, occasionally belligerent boy to a docile adult. . . . The overwhelming injustice done to [Wilson] is mind-boggling, and Burch and Joyner have told his story with thoroughness and passion.”--Washington Post