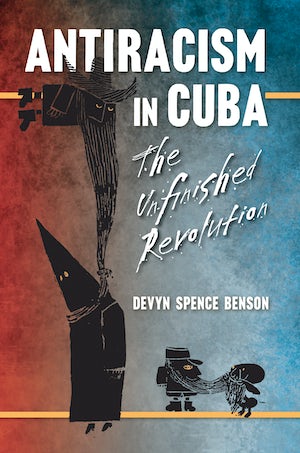 Analyzing the ideology and rhetoric around race in Cuba and south Florida during the early years of the Cuban revolution, Devyn Spence Benson argues that ideas, stereotypes, and discriminatory practices relating to racial difference persisted despite major efforts by the Cuban state to generate social equality. Drawing on Cuban and U.S. archival materials and face-to-face interviews, Benson examines 1960s government programs and campaigns against discrimination, showing how such programs frequently negated their efforts by reproducing racist images and idioms in revolutionary propaganda, cartoons, and school materials.

Building on nineteenth-century discourses that imagined Cuba as a raceless space, revolutionary leaders embraced a narrow definition of blackness, often seeming to suggest that Afro-Cubans had to discard their blackness to join the revolution. This was and remains a false dichotomy for many Cubans of color, Benson demonstrates. While some Afro-Cubans agreed with the revolution's sentiments about racial transcendence--"not blacks, not whites, only Cubans"--others found ways to use state rhetoric to demand additional reforms. Still others, finding a revolution that disavowed blackness unsettling and paternalistic, fought to insert black history and African culture into revolutionary nationalisms. Despite such efforts by Afro-Cubans and radical government-sponsored integration programs, racism has persisted throughout the revolution in subtle but lasting ways.

"Unearths the substrate of historical successes, hypocrisies, and strategic elisions underlying contemporary debates about Cuban race relations. . . . Powerfully complicates the oft-repeated idea that racism 'returned' to the island during the trying post-Soviet economic crisis of the 1990s."--Michael J. Bustamante, NACLA Report on the Americas

“Benson’s thoughtful book challenges many ideas about race in Cuba and in general. . . . Provides a perspective not otherwise found in studies of the Cuban Revolution, and stresses Afro-descendants’ ownership of their place in Cuba’s history. Highly recommended.”--Choice

"This is an impressive piece of research as it digs deep in order to explain the ways the new government [in Cuba] addressed the thorny issues of race and racial discrimination."--Canadian Journal of History