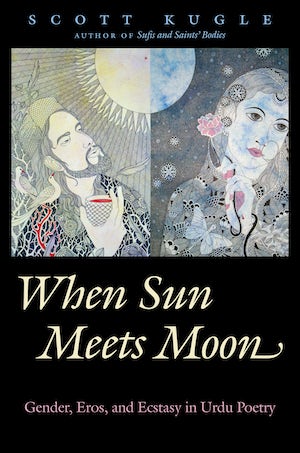 The two Muslim poets featured in Scott Kugle's comparative study lived separate lives during the eighteenth and early-nineteenth centuries in the Deccan region of southern India. Here, they meet in the realm of literary imagination, illuminating the complexity of gender, sexuality, and religious practice in South Asian Islamic culture. Shah Siraj Awrangabadi (1715-1763), known as "Sun," was a Sunni who, after a youthful homosexual love affair, gave up sexual relationships to follow a path of personal holiness. Mah Laqa Bai Chanda (1768-1820), known as "Moon," was a Shi'i and courtesan dancer who transferred her seduction of men to the pursuit of mystical love. Both were poets in the Urdu language of the ghazal, or love lyric, often fusing a spiritual quest with erotic imagery.

Kugle argues that Sun and Moon expressed through their poetry exceptions to the general rules of heteronormativity and gender inequality common in their patriarchal societies. Their art provides a lens for a more subtle understanding of both the reach and the limitations of gender roles in Islamic and South Asian culture and underscores how the arts of poetry, music, and dance are integral to Islamic religious life. Integrated throughout are Kugle's translations of Urdu and Persian poetry previously unavailable in English.

Scott A. Kugle, associate professor of South Asian and Islamic studies at Emory University, is the author of Sufis and Saints' Bodies: Mysticism, Corporeality, and Sacred Power in Islam.
For more information about Scott Kugle, visit the Author Page.

"Lively, engaging, and lucid, When Sun Meets Moon is a jewel of a book that enables a rethinking of normative understandings of the relationship between gender, sexuality and spirituality. Combining a sharp set of analytical insights with a finely honed and fragrant presentation of Sufi aesthetics, this transformative book foregrounds the humanity of these historical poets and displays Scott Kugle's sheer love of Urdu poetry and culture."--Sa'diyya Shaikh, University of Cape Town

"In this book that puts the lives and works of two significant and hitherto overlooked Urdu poets into conversation with each other, Scott Kugle provides unique insight into the composite Islamicate cultures of the Deccan. By successfully integrating accounts of historical and cultural developments in that region into his narrative, he explores the wider religious and social milieu in which these poets wrote and lived. A must read for anyone interested in Urdu literary history and Dakkani culture."--Ali Asani, Harvard University