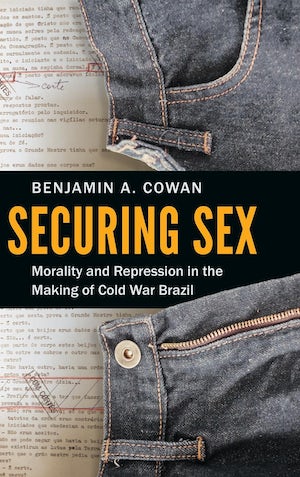 In this history of right-wing politics in Brazil during the Cold War, Benjamin Cowan puts the spotlight on the Cold Warriors themselves. Drawing on little-tapped archival records, he shows that by midcentury, conservatives--individuals and organizations, civilian as well as military--were firmly situated in a transnational network of right-wing cultural activists. They subsequently joined the powerful hardline constituency supporting Brazil's brutal military dictatorship from 1964 to 1985. There, they lent their weight to a dictatorship that, Cowan argues, operationalized a moral panic that conflated communist subversion with manifestations of modernity, coalescing around the crucial nodes of gender and sexuality, particularly in relation to youth, women, and the mass media.

The confluence of an empowered right and a security establishment suffused with rightist moralism created strongholds of anticommunism that spanned government agencies, spurred repression, and generated attempts to control and even change quotidian behavior. Tracking how limits to Cold War authoritarianism finally emerged, Cowan concludes that the record of autocracy and repression in Brazil is part of a larger story of reaction against perceived threats to traditional views of family, gender, moral standards, and sexuality--a story that continues in today's culture wars.

“A major contribution to our understanding of the Brazilian military dictatorship of 1964 to 1985.”--Journal of Interdisciplinary History

“An important and unique addition to the growing literature on the Cold War and dictatorship in Brazil.”--Luso-Brazilian Review

"Meticulously researched, convincingly argued, and beautifully written about a topic that is fascinating, understudied, and remarkably applicable to today's political context, Securing Sex will be of interest not only to undergraduates, graduate students, and scholars interested in Cold War Latin America, but also to people beyond the academy eager to understand the moral ideology that underlies right-wing politics in much of the contemporary West, including the United States."--HAHR

“Challenges scholars to rewrite the traditional historical narratives about the dictatorship.”--Journal of Social History

"Beautifully written, Securing Sex is a pathbreaking intervention into the histories of the global Cold War, the Brazilian dictatorship, revolutionary and counter-revolutionary struggles, sexuality, and youth; reading it was a true pleasure. Benjamin Cowan shows with clarity and ingenuity how a right-wing 'moral panic' drove many of the repressive policies that characterized the Brazilian dictatorship, directly impacting the lives of those who lived through it."--Victoria Langland, University of Michigan

"By treating right-wing discourses about morality with the same seriousness with which others have treated left-wing discourses, Benjamin Cowan expands our understandings of why dictatorships resonated in post-World War II Latin America and how the regimes and their opponents negotiated word and action."--Jeffrey Lesser, Emory University