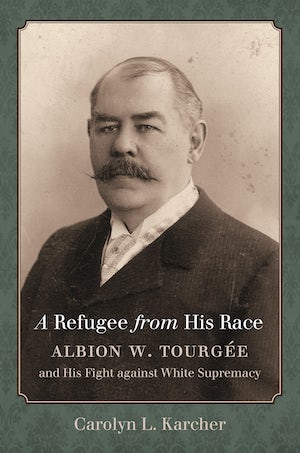 During one of the darkest periods of U.S. history, when white supremacy was entrenching itself throughout the nation, the white writer-jurist-activist Albion W. Tourgée (1838-1905) forged an extraordinary alliance with African Americans. Acclaimed by blacks as "one of the best friends of the Afro-American people this country has ever produced" and reviled by white Southerners as a race traitor, Tourgée offers an ideal lens through which to reexamine the often caricatured relations between progressive whites and African Americans. He collaborated closely with African Americans in founding an interracial civil rights organization eighteen years before the inception of the NAACP, in campaigning against lynching alongside Ida B. Wells and Cleveland Gazette editor Harry C. Smith, and in challenging the ideology of segregation as lead counsel for people of color in the 1896 Plessy v. Ferguson case. Here, Carolyn L. Karcher provides the first in-depth account of this collaboration. Drawing on Tourgée’s vast correspondence with African American intellectuals, activists, and ordinary folk, on African American newspapers and on his newspaper column, “A Bystander’s Notes,” in which he quoted and replied to letters from his correspondents, the book also captures the lively dialogue about race that Tourgée and his contemporaries carried on.

Carolyn L. Karcher is the author of The First Woman in the Republic: A Cultural Biography of Lydia Maria Child and the editor of Tourgee's novel Bricks Without Straw.
For more information about Carolyn L. Karcher, visit the Author Page.

“Competent scholarship based on original research. Highly recommended for both subject specialists and all readers interested in the biracial fight for equality long before the modern civil rights movement.”--Library Journal, starred review

"Urges historians not to dismiss Jim-Crow era white progressives like Tourgée as paternalists who fell short of 'present-day standards of political correctness.'"--News & Observer

"This is a remarkable book that promises to be the definitive study of Albion W. Tourgée’s civil rights activism in the final decades of his life. Carolyn L. Karcher tells Tourgée’s story as no one before her has, illuminating the complexity of his relationship with black activists and leaders. She takes us to the front lines of the doomed struggle against racism and Jim Crow in the 1890s and provides a new perspective on it."--Mark Elliott, author of Color-Blind Justice: Albion Tourgée and the Quest for Racial Equality from the Civil War to Plessy V. Ferguson

"In this rich study, Carolyn L. Karcher brings to the fore the overlooked voices of African Americans working to resist the onset of Jim Crow in the late nineteenth century, while revealing Albion W. Tourgée’s role as a vital ally to African Americans during the rise in white supremacy in America."--Brook Thomas, author of The Literature Of Reconstruction: Not In Plain Black And White

"A Refugee from His Race unfolds the meaning of Albion Tourgée before and beyond his role in Plessy v. Ferguson. With painstaking attention to abundant nineteenth-century sources, Carolyn L. Karcher brilliantly laces together Tourgée’s cross-racial work and cultural activism with that of his African American compatriots--Charles Chesnutt, T. Thomas Fortune, Ida B. Wells, and more--to provide a compelling, evenhanded, and overarching panorama of social justice in the 1890s. Focusing on the white Tourgée’s empathy, advocacy, and writings as a way of accessing often-contentious civic alliances and blurred societal transformations during a volatile period in U.S. race relations, Karcher presents a brave model of visionary political stances that speaks directly to ongoing racial challenges and inequities today." --Thadious M. Davis, author of Southscapes: Geographies of Race, Region, and Literature