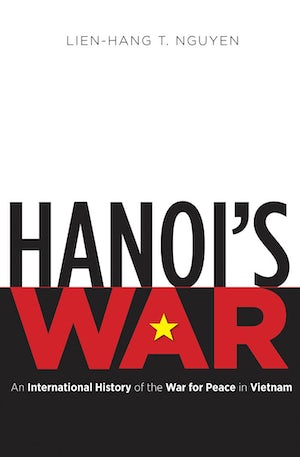 Listen: Interview on Voice of America

While most historians of the Vietnam War focus on the origins of U.S. involvement and the Americanization of the conflict, Lien-Hang T. Nguyen examines the international context in which North Vietnamese leaders pursued the war and American intervention ended. This riveting narrative takes the reader from the marshy swamps of the Mekong Delta to the bomb-saturated Red River Delta, from the corridors of power in Hanoi and Saigon to the Nixon White House, and from the peace negotiations in Paris to high-level meetings in Beijing and Moscow, all to reveal that peace never had a chance in Vietnam.

Hanoi's War renders transparent the internal workings of America's most elusive enemy during the Cold War and shows that the war fought during the peace negotiations was bloodier and much more wide ranging than it had been previously. Using never-before-seen archival materials from the Vietnam Ministry of Foreign Affairs, as well as materials from other archives around the world, Nguyen explores the politics of war-making and peace-making not only from the North Vietnamese perspective but also from that of South Vietnam, the Soviet Union, China, and the United States, presenting a uniquely international portrait.

"Without question, Hanoi's War stands as a major accomplishment and one of the most important scholarly works to appear on this later, and relatively understudied, phase of the struggle."--Foreign Affairs

"Hanoi's War is first-rate. The scope is ambitious. . . . The value of Hanoi's War is its use of existing records to produce a new interpretation of Hanoi's struggle. It adds a valuable new chapter to the international history of the war."--Journal of Military History

"Stunning. . . . [Nguyen] presents a compelling view from 'the other side of the hill.'"--Sea Classics

"A must addition for any academic library today. Essential. All levels/libraries."--Choice

“Whatever you think you know about the war in Vietnam will be challenged, revised, and deepened by this remarkable book. . . . Hanoi’s War is a must-read. . . .The book deserves more attention than it has thus far received. It enriches our understanding of the War in Vietnam and by implication, subsequent American commitments, including the war in Afghanistan.”--Artfuse