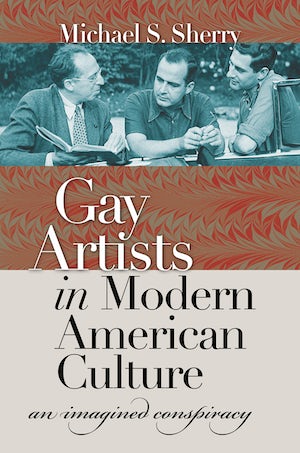 Today it is widely recognized that gay men played a prominent role in defining the culture of mid-twentieth-century America, with such icons as Tennessee Williams, Edward Albee, Aaron Copland, Samuel Barber, Montgomery Clift, and Rock Hudson defining much of what seemed distinctly "American" on the stage and screen. Even though few gay artists were "out," their sexuality caused significant anxiety during a time of rampant antihomosexual attitudes. Michael Sherry offers a sophisticated analysis of the tension between the nation's simultaneous dependence on and fear of the cultural influence of gay artists.

Sherry places conspiracy theories about the "homintern" (homosexual international) taking control and debasing American culture within the paranoia of the time that included anticommunism, anti-Semitism, and racism. Gay artists, he argues, helped shape a lyrical, often nationalist version of American modernism that served the nation's ambitions to create a cultural empire and win the Cold War. Their success made them valuable to the country's cultural empire but also exposed them to rising antigay sentiment voiced even at the highest levels of power (for example, by President Richard Nixon). Only late in the twentieth century, Sherry concludes, did suspicion slowly give way to an uneasy accommodation of gay artists' place in American life.

Michael S. Sherry is professor of history at Northwestern University and author of three books, including the Bancroft Prize-winning The Rise of American Air Power: The Creation of Armageddon.
For more information about Michael S. Sherry, visit the Author Page.

"The accomplishments of Gay Artists are many. . . . Highly recommended for scholars--and also for non-academics--who have interests in twentieth-century American culture, in queer studies, and in studies of modern U.S. empire. . . . It should become a vital reference for those studying how these three interconnected subjects collided. . . . Gay Artists recently won the 2008 LGBT Award for Nonfiction from the Lambda Literary Foundation. It deserves to pick up several more."--American Studies

“This book examines a new series of discourse about gay men who were prominent in the field of the arts and letters and is a valuable contribution to cultural history in the United States.”--Journal of the History of Sexuality

"A first-rate contribution to American cultural history."--Journal of American History

"As an in-depth look at the critical reaction to major American artists, Sherry's study compares favorably to other academic studies. . . . Recommended."--CHOICE