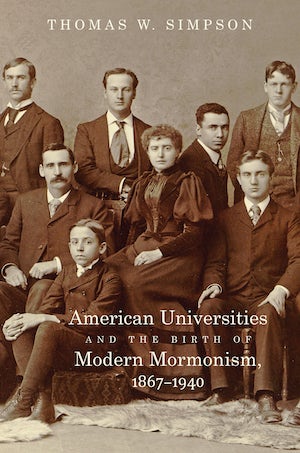 In the closing decades of the nineteenth century, college-age Latter-day Saints began undertaking a remarkable intellectual pilgrimage to the nation's elite universities, including Harvard, Columbia, Michigan, Chicago, and Stanford. Thomas W. Simpson chronicles the academic migration of hundreds of LDS students from the 1860s through the late 1930s, when church authority J. Reuben Clark Jr., himself a product of the Columbia University Law School, gave a reactionary speech about young Mormons' search for intellectual cultivation. Clark's leadership helped to set conservative parameters that in large part came to characterize Mormon intellectual life.

At the outset, Mormon women and men were purposefully dispatched to such universities to "gather the world's knowledge to Zion." Simpson, drawing on unpublished diaries, among other materials, shows how LDS students commonly described American universities as egalitarian spaces that fostered a personally transformative sense of freedom to explore provisional reconciliations of Mormon and American identities and religious and scientific perspectives. On campus, Simpson argues, Mormon separatism died and a new, modern Mormonism was born: a Mormonism at home in the United States but at odds with itself. Fierce battles among Mormon scholars and church leaders ensued over scientific thought, progressivism, and the historicity of Mormonism’s sacred past. The scars and controversy, Simpson concludes, linger.

“Excellent scholarship on social and educational history as it pertains to religion. Highly recommended.”--Choice

“An important, well-written, and engaging volume. . . . Should now be required reading for any Mormon academic, regardless of their field.”--Association for Mormon Letters

“Simpson’s insights should be incorporated into future discussions on what is often an oversimplified historical narrative.”--Reading Religion

“After reading American Universities, readers come away sensing some of the impact that higher education has had on the Church”--BYU Studies Quarterly

“Provides an excellent prologue of a critical period leading to the coming of age of modern Mormons.”--History of Education Quarterly

Visit the author's page at goodreads.com.