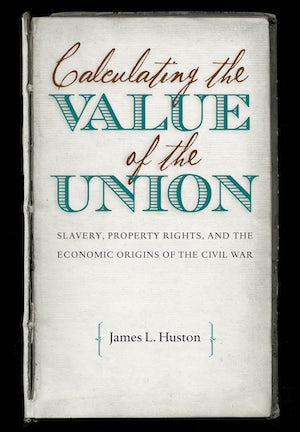 To purchase online via an independent bookstore, visit Bookshop.org
While slavery is often at the heart of debates over the causes of the Civil War, historians are not agreed on precisely what aspect of slavery--with its various social, economic, political, cultural, and moral ramifications--gave rise to the sectional rift. In Calculating the Value of the Union, James Huston integrates economic, social, and political history to argue that the issue of property rights as it pertained to slavery was at the center of the Civil War.

In the early years of the nineteenth century, southern slaveholders sought a national definition of property rights that would recognize and protect their ownership of slaves. Northern interests, on the other hand, opposed any national interpretation of property rights because of the threat slavery posed to the northern free labor market, particularly if allowed to spread to western territories. This impasse sparked a process of political realignment that culminated in the creation of the Republican Party, ultimately leading to the secession crisis.

Deeply researched and carefully written, this study rebuts recent trends in antebellum historiography and persuasively argues for a fundamentally economic interpretation of the slavery issue and the coming of the Civil War.

James L. Huston is professor of history at Oklahoma State University in Stillwater. His books include Securing the Fruits of Labor: The American Concept of Wealth Distribution, 1765-1900.

"Readers will appreciate this book's exhaustive treatment of the role that property rights played in the demise of the Second Party System and the coming of the Civil War."--American Historical Review

"For persuasively conveying the eminence of property rights in the drive toward secession and the Civil War, and for its engaging literary style, [this] book is strongly recommended."--The Historian

"After a considerable period of neglect, the origins of the Civil War are back on the historical agenda, and James Huston's foray into this subject is extremely welcome."--Civil War History

"It will surely stand as a lasting contribution to the ever-expounding literature on the causes of the sectional schism. . . . Calculating the Winds of the Union: Slavery, Property Rights, and the Economics Origins of the Civil War is another large step toward answering exactly how slavery caused the Civil War."--Georgia Historical Quarterly

"Huston's work provides a valuable synthesis of economic ideas and their role in the Civil War. . . . Huston profitably synthesizes the many strands of antebellum economic thinking and offers a fresh and intriguing perspective on the war."--Journal of Illinois History