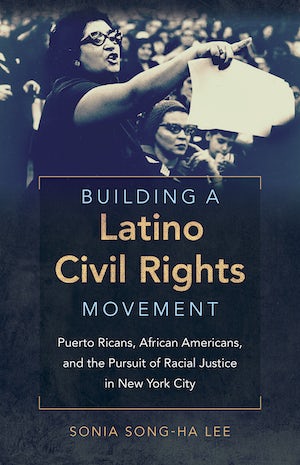 In the first book-length history of Puerto Rican civil rights in New York City, Sonia Lee traces the rise and fall of an uneasy coalition between Puerto Rican and African American activists from the 1950s through the 1970s. Previous work has tended to see blacks and Latinos as either naturally unified as "people of color" or irreconcilably at odds as two competing minorities. Lee demonstrates instead that Puerto Ricans and African Americans in New York City shaped the complex and shifting meanings of "Puerto Rican-ness" and "blackness" through political activism. African American and Puerto Rican New Yorkers came to see themselves as minorities joined in the civil rights struggle, the War on Poverty, and the Black Power movement--until white backlash and internal class divisions helped break the coalition, remaking "Hispanicity" as an ethnic identity that was mutually exclusive from "blackness."

“[A] pathbreaking history of Puerto Rican activism in New York.”--Choice

"Lee shows that working-class communities have the power and potential to come together and challenge the terms of their political affiliations and social circumstances.... She decisively rewrites the history of the decade and reminds us that the so-called black-white binary has been a means of social control rather than ethnographic description."--Journal of African American History

"An important contribution to the emerging scholarship on the long civil rights movement, as well as to more nuanced treatments of the War on Poverty."--Journal of American History

"The book painstakingly illustrates the broad scope of Black-Puerto Rican activism in New York City, showing that it encompassed many spheres of social and political mobilization, including those not associated with radical movements. A significant contribution to Puerto Rican, African American, New York, and U.S. postwar history, this book will be an important contribution to the ongoing debate on 'Black/Brown relations' in the United States."--Frank Andre Guridy, author of Forging Diaspora: Afro-Cubans and African Americans in a World of Empire and Jim Crow

"Lee's thorough and careful research into the history of grassroots politics in the 1960s and 1970s represents an important addition to the literature on the civil rights movement and its coda in New York City. The story she tells of the uneasy collaborations between Puerto Rican and African American activists and leaders in this period adds much-needed depth to the history of New York in general and to the history of civil rights activism in particular."--Lorrin Thomas, Rutgers University-Camden