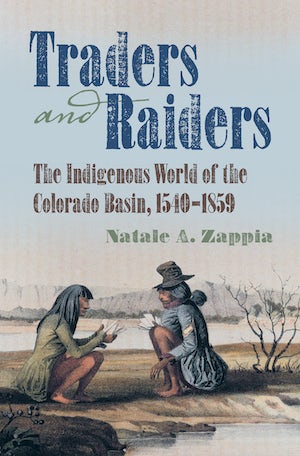 The Colorado River region looms large in the history of the American West, vitally important in the designs and dreams of Euro-Americans since the first Spanish journey up the river in the sixteenth century. But as Natale A. Zappia argues in this expansive study, the Colorado River basin must be understood first as home to a complex Indigenous world. Through 300 years of western colonial settlement, Spaniards, Mexicans, and Americans all encountered vast Indigenous borderlands peopled by Mojaves, Quechans, Southern Paiutes, Utes, Yokuts, and others, bound together by political, economic, and social networks. Examining a vast cultural geography including southern California, Nevada, Utah, Arizona, Sonora, Baja California, and New Mexico, Zappia shows how this interior world pulsated throughout the centuries before and after Spanish contact, solidifying to create an autonomous, interethnic Indigenous space that expanded and adapted to an ever-encroaching global market economy.

Situating the Colorado River basin firmly within our understanding of Indian country, Traders and Raiders investigates the borders and borderlands created during this period, connecting the coastlines of the Atlantic and Pacific worlds with a vast Indigenous continent.

"Makes powerful contributions that add exciting geographies and cultures to an already teeming and complex Southwest borderlands."--Journal of American History

“Paints a vivid portrait of a Native-dominated landscape that would otherwise be inaccessible in a history based solely on archival sources.”--Journal of Interdisciplinary History

"An important and timely contribution to Borderlands, Indian and Western history… provide[s] us with a greater understanding of the contested and colonized spaces of the US-Mexico borderlands."--Journal of Colonialism and Colonial History

“Well researched. . . . A solid contribution to the historiography of Native America.”--The Historian

“Filled to the brim with arguments, insights, and interventions. . . . A superb example of a kind of braided history in which different modes of analysis--social, cultural, environmental, and spatial--blend into a seamless whole.”--American Historical Review