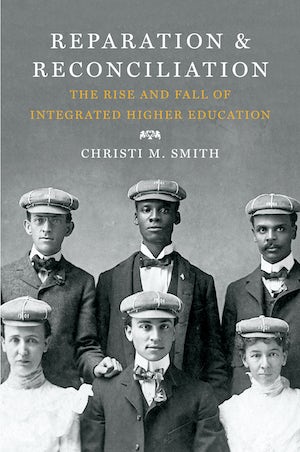 To purchase online via an independent bookstore, visit Bookshop.org
Reparation and Reconciliation is the first book to reveal the nineteenth-century struggle for racial integration on U.S. college campuses. As the Civil War ended, the need to heal the scars of slavery, expand the middle class, and reunite the nation engendered a dramatic interest in higher education by policy makers, voluntary associations, and African Americans more broadly. Formed in 1846 by Protestant abolitionists, the American Missionary Association united a network of colleges open to all, designed especially to educate African American and white students together, both male and female. The AMA and its affiliates envisioned integrated campuses as a training ground to produce a new leadership class for a racially integrated democracy. Case studies at three colleges--Berea College, Oberlin College, and Howard University--reveal the strategies administrators used and the challenges they faced as higher education quickly developed as a competitive social field.

Through a detailed analysis of archival and press data, Christi M. Smith demonstrates that pressures between organizations--including charities and foundations--and the emergent field of competitive higher education led to the differentiation and exclusion of African Americans, Appalachian whites, and white women from coeducational higher education and illuminates the actors and the strategies that led to the persistent salience of race over other social boundaries.

Christi M. Smith is Assistant Dean and Senior Scholar at the Center for Diversity and Inclusion at Washington University in St. Louis.
For more information about Christi M. Smith, visit the Author Page.

“[A] compelling account of the rise and fall of racially integrated education in the decades following the Civil War and the first decade of the twentieth century.”--Journal of American History

"Offers a fresh approach to the study of integration in higher education . . . [and] highlights the role of individual colleges and universities in shaping the racial project of school integration, positioning organizations as mesolevel bridges to macrolevel structural processes of racial formation and microlevel processes of racial identity construction...Smith also places organizations front and center as significant sites of racial construction—something we need much more of in race scholarship."--American Journal of Sociology

"Deeply researched and original in focus, this excellent book deals with important and fundamental issues in nineteenth-century American history. Christi M. Smith has drafted a leading scholarly work that will be lauded in reviews and cited by colleagues."--Desmond King, University of Oxford

"Without sacrificing rich and telling historical detail, Christi M. Smith engages large themes, creating a book that will garner attention within important ongoing conversations associated with educational equity, the manner in which segregation is manifested and reproduced, the degree to which such outcomes are fixed or mutable, and, most sweepingly, the legacy of racial (and racist) practices in the United States--a conversation that has taken on renewed salience. With its rich, incisive, and engaging historical accounts, this book can and should speak compellingly to varied audiences."--David Cunningham, Washington University in St. Louis

"Reparation and Reconciliation is an excellent work. It demonstrates the role of organizations in producing racial difference. It calls into question the inevitability of a higher education system organized by race (black or white colleges) and gender (men’s or women’s colleges). . . . As colleges and universities continue to struggle to foster meaningful representation of black students on campus and to support cross-racial interaction, this book is both timely and necessary."--Contemporary Sociology

“Smith presents a logically organized and well-supported narrative of interracial education attempted and abandoned. She makes several important historiographical contributions. First, she adds to the woefully small literature on higher education for blacks in the nineteenth century. Second, she highlights a little-recognized aspect of postbellum educational growth: universities and industrial schools emerged, in part, out of the market-driven rejection of anti-caste universalism. More broadly, her emphasis on the consequences of government's absence in higher education balances a recent trend in scholarship toward analysis of its presence.”--The Register of the Kentucky Historical Society