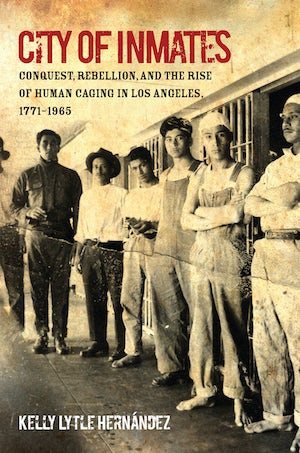 Kelly Lytle Hernandez is professor of history and African American studies at UCLA. She is also interim director of the Ralph J. Bunche Center for African American Studies at UCLA. One of the nation’s leading experts on race, immigration, and mass incarceration, she is author of the award-winning book Migra! A History of the U.S. Border Patrol (University of California Press, 2010) and City of Inmates: Conquest, Rebellion, and the Rise of Human Caging in Los Angeles (University of North Carolina Press, 2017). Currently, Professor Lytle Hernandez is the research lead for the Million Dollar Hoods project, which maps how much is spent on incarceration per neighborhood in Los Angeles County.
For more information about Kelly Lytle Hernández, visit the Author Page.

“Hernandez puts in perspective the arrests, convictions, and incarceration for one city that contributes to the US being the carceral capital of the world. Recommended.”--Choice

“Details how successive authoritarian powers in present-day Los Angeles have targeted and captured people using cages to create what is now one of the world's largest prison societies, and ends with a call for it to be destroyed.”--The New Inquiry

“Marshaling more than two centuries of historical data, Hernandez finds that native elimination, immigrant exclusion, and black disappearance drove the rise of mass incarceration in Los Angeles from the Spanish colonial era to the outbreak of the 1965 Watts Rebellion.”--Law & Social Inquiry

“Convincingly demonstrates that the history of American prisons indexes major social and political battles of the country’s history.”--Western Historical Quarterly

“An incisive and meticulously researched study of the transformation of Los Angeles from a small group of Native American communities in the 18th century into an Aryan city of the sun in the 20th.”--Los Angeles Review of Books