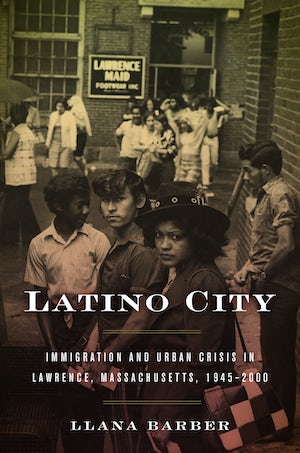 Latino City explores the transformation of Lawrence, Massachusetts, into New England’s first Latino-majority city. Like many industrial cities, Lawrence entered a downward economic spiral in the decades after World War II due to deindustrialization and suburbanization. The arrival of tens of thousands of Puerto Ricans and Dominicans in the late twentieth century brought new life to the struggling city, but settling in Lawrence was fraught with challenges. Facing hostility from their neighbors, exclusion from local governance, inadequate city services, and limited job prospects, Latinos fought and organized for the right to make a home in the city.

In this book, Llana Barber interweaves the histories of urban crisis in U.S. cities and imperial migration from Latin America. Pushed to migrate by political and economic circumstances shaped by the long history of U.S. intervention in Latin America, poor and working-class Latinos then had to reckon with the segregation, joblessness, disinvestment, and profound stigma that plagued U.S. cities during the crisis era, particularly in the Rust Belt. For many Puerto Ricans and Dominicans, there was no “American Dream” awaiting them in Lawrence; instead, Latinos struggled to build lives for themselves in the ruins of industrial America.

Llana Barber is associate professor of American studies at the State University of New York College at Old Westbury.
For more information about Llana Barber, visit the Author Page.

“Passionately examines the painful transformation of Lawrence, Massachusetts, from a declining post-WW II industrial city into a majority Latino city with its own distinctive identity and challenges in the 21st century. Recommended.”--Choice

“Sociologists and historians will find that Barber’s complex approach opens new discussions on “imperial migrants” and “urban crisis” as it relates to US imperialism and racial tensions. By bringing the reader into the center of urban politics in the twentieth and twenty-first century, Barber carves out a space for these important debates.”--The Sixties

"An excellent, engagingly written book that is a must-read for anyone interested in Latino, urban/metropolitan, immigration, and political history."--American Historical Review

“An exceptional book that makes a substantial contribution to the fields of urban, immigration, and Latino studies.”--Labor: Studies in Working-Class History

“Barber’s account is a worthwhile and significant step towards correcting the relative absence of Latinos in the historiography of urban uprisings and is extremely relevant to an understanding race relations and urban underdevelopment in New England.”--Historical Journal of Massachusetts

“Barber skillfully balances an analysis of the structural factors with the personal experiences of those involved in the events of 1984.”--Historical Journal of Massachusetts