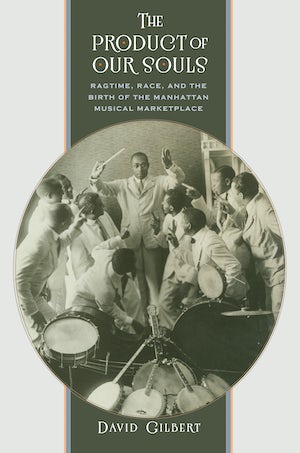 In 1912 James Reese Europe made history by conducting his 125-member Clef Club Orchestra at Carnegie Hall. The first concert by an African American ensemble at the esteemed venue was more than just a concert--it was a political act of desegregation, a defiant challenge to the status quo in American music. In this book, David Gilbert explores how Europe and other African American performers, at the height of Jim Crow, transformed their racial difference into the mass-market commodity known as "black music." Gilbert shows how Europe and others used the rhythmic sounds of ragtime, blues, and jazz to construct new representations of black identity, challenging many of the nation's preconceived ideas about race, culture, and modernity and setting off a musical craze in the process.

Gilbert sheds new light on the little-known era of African American music and culture between the heyday of minstrelsy and the Harlem Renaissance. He demonstrates how black performers played a pioneering role in establishing New York City as the center of American popular music, from Tin Pan Alley to Broadway, and shows how African Americans shaped American mass culture in their own image.

David Gilbert is an independent scholar who received a Ph.D. in U.S. history from the University of Wisconsin-Madison. He lives in Asheville, North Carolina.
For more information about David Gilbert, visit the Author Page.

“An important resource for those interested in race relations, urban history, and entertainment history as well as early 20th-century music.”--Choice

Gilbert’s work narrates racism’s history and its potential transcendence through musical forms, with ragtime the groundbreaking example of the modern era. . . . Has lasting value as a detail-oriented cultural history.”--Journal of American History

“Gilbert’s race-infused academic analysis may be clearer than either the romanticized notions inherited by the general public about the era, or the culture blindness of earlier authorities on this topic. It may also be off-putting to some readers. But if you find these ideas captivating do yourself a favor and read the book.”--The Syncopated Times

"The Product of Our Souls has the potential to be one of the most important works of urban cultural history produced in the last twenty years. For so long, the stories of the Johnson Brothers, the Marshall Hotel, James Reese Europe, and others have been used to close the curtains on minstrelsy or open the doors of the New Negro Renaissance. But here we see a cogent and fully developed story of its own, the story of a ragtime modernity, the period where race is identified as a key conduit in the creation of the American musical marketplace."--Davarian L. Baldwin, author of Chicago’s New Negroes: Modernity, the Great Migration, and Black Urban Life

“You might think you already know the story of the birth of ragtime, but The Product of Our Souls gives us an entirely fresh look at this musical expression of African American modernity. David Gilbert provides readers with a new understanding of the creative autonomy and power of African American composers, musicians, and playwrights as they shaped the future of American popular music in relation to white supremacy and an emerging consumer culture.”--Barry Shank, author of The Political Force of Musical Beauty