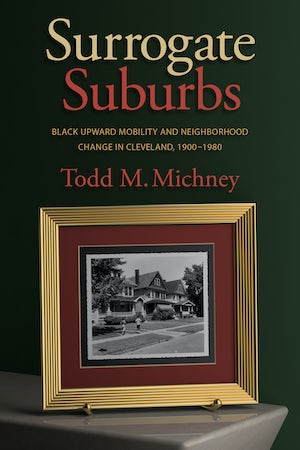 The story of white flight and the neglect of Black urban neighborhoods has been well told by urban historians in recent decades. Yet much of this scholarship has downplayed Black agency and tended to portray African Americans as victims of structural forces beyond their control. In this history of Cleveland’s Black middle class, Todd Michney uncovers the creative ways that members of this nascent community established footholds in areas outside the overcrowded, inner-city neighborhoods to which most African Americans were consigned. In asserting their right to these outer-city spaces, African Americans appealed to city officials, allied with politically progressive whites (notably Jewish activists), and relied upon both Black and white developers and real estate agents to expand these "surrogate suburbs" and maintain their livability until the bona fide suburbs became more accessible.

By tracking the trajectories of those who, in spite of racism, were able to succeed, Michney offers a valuable counterweight to histories that have focused on racial conflict and Black poverty and tells the neglected story of the Black middle class in America’s cities prior to the 1960s.

Todd M. Michney is associate professor in the School of History and Sociology at the Georgia Institute of Technology.
For more information about Todd M. Michney, visit the Author Page.

“Offers a nuanced and complex picture of how African Americans navigated rampant racial discrimination, intra-racial politics, and changing economic conditions to build lives on the outskirts of an industrial city.”--American Historical Review

“Based upon the systematic examination of several black neighborhoods just inside the municipal boundaries of Cleveland, this extraordinary book offers a reinterpretation of the class dynamics of black population movement from established to new neighborhoods within the city. Michney forces us to rethink not only our understanding of African American urban community formation and reformation but also the character and impact of class and race relations during the development of black urban neighborhoods.”—Joe William Trotter Jr., Carnegie Mellon University

“In his fascinating new book, Todd Michney takes us into the early and mid-twentieth century’s ‘surrogate suburbs’: small enclaves on the outskirts of cities where middle-class African Americans often moved in search of security and upward mobility. By recovering those long-overlooked communities, he’s made a valuable contribution to our understanding of the African American urban experience.”--Kevin Boyle, Northwestern University