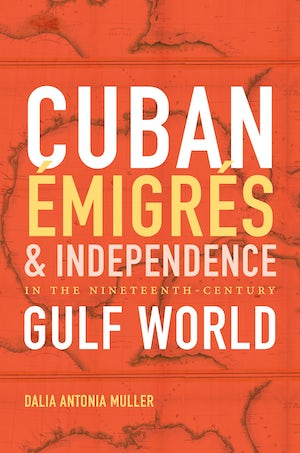 During the violent years of war marking Cuba’s final push for independence from Spain, over 3,000 Cuban émigrés, men and women, rich and poor, fled to Mexico. But more than a safe haven, Mexico was a key site, Dalia Antonia Muller argues, from which the expatriates helped launch a mobile and politically active Cuban diaspora around the Gulf of Mexico. Offering a new transnational vantage on Cuba’s struggle for nationhood, Muller traces the stories of three hundred of these Cuban émigrés and explores the impact of their lives of exile, service to the revolution and independence, and circum-Caribbean solidarities.

While not large in number, the émigrés excelled at community building, and their effectiveness in disseminating their political views across borders intensified their influence and inspired strong nationalistic sentiments across Latin America. Revealing that émigrés’ efforts were key to a Cuban Revolutionary Party program for courting Mexican popular and diplomatic support, Muller shows how the relationship also benefited Mexican causes. Cuban revolutionary aspirations resonated with Mexican students, journalists, and others alarmed by the violation of constitutional rights and the increasing conservatism of the Porfirio Díaz regime. Finally, Muller follows émigrés’ return to Cuba after the Spanish-American War, their lives in the new republic ineluctably shaped by their sojourn in Mexico.

“[Muller] weaves together a social history of migrants’ daily lives with an intellectual history of revolutionary thought in political organizations and the press.”--New West Indian Guide

“Offers exciting and original insight into an experience of exile long recognized as central to Cuban history.”--American Historical Review

“Sets a path toward a better international understanding of the history and impact of the nineteenth-century Cuban war and émigré experience.”--Hispanic American Historical Review

“Muller shifts our perspective from a three-way conflict over the future of the island between the United States, Cuba, and Spain to reveal alternate views from Mexico and elsewhere in Latin America.” --Brill Journals

“Muller performs nothing short of a feat of great historiography when bringing Cuban independence back into the distinct Latin American context in which it unfolded. . . . A capacious history of revolutionary politics. . . . Cuban Émigrés is well written, thoroughly researched, and convincingly argued.”--Cuban Studies

“It is the social and political space that Muller maps out that marks Cuban Émigrés in the Nineteenth-Century Gulf World as a significant contribution to the historiography of several countries at once. . . . She manages to organise and recontextualise the history of a region into a groundwork for similar studies.”--Bulletin of Latin American Research