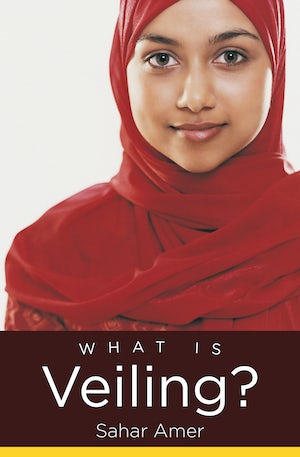 Not for Sale in the British Commonwealth (except Canada), Europe, the Middle East, or South Asia

More on the What Is? Series

Ranging from simple head scarf to full-body burqa, the veil is worn by vast numbers of Muslim women around the world. What Is Veiling? explains one of the most visible, controversial, and least understood emblems of Islam. Sahar Amer's evenhanded approach is anchored in sharp cultural insight and rich historical context. Addressing the significance of veiling in the religious, cultural, political, and social lives of Muslims, past and present, she examines the complex roles the practice has played in history, religion, conservative and progressive perspectives, politics and regionalism, society and economics, feminism, fashion, and art.

By highlighting the multiple meanings of veiling, the book decisively shows that the realities of the practice cannot be homogenized or oversimplified and extend well beyond the religious and political accounts that are overwhelmingly proclaimed both inside and outside Muslim-majority societies. Neither defending nor criticizing the practice, What Is Veiling? clarifies the voices of Muslim women who struggle to be heard and who, veiled or not, demand the right to live spiritual, personal, and public lives in dignity.

Sahar Amer is professor of Arabic and Islamic studies at the University of Sydney.
For more information about Sahar Amer, visit the Author Page.

"[Amer] offers perhaps the definitive glossary on veiling. . . . Amer's deliberate and caring scholarly treatment is pitch perfect. This book about 'hijabistas,' 'muhajababes,' and veiled Muslim hip-hop artists, among others, is not just about veiling; it is the story of Islam, especially modern Islam, told through the prism of the veil."--Publishers Weekly, starred review

"In Amer’s able hands, the often feminist, anti-colonist nature of veiling is brought to light. . . . In prose that is approachable and sympathetic, and with research spanning nations and centuries, Amer’s project manages to be both comprehensive and illuminative. . . . An important work that stands to advance multicultural conversations and is a must-read for all those who wish to intelligently approach the subject of Muslim women and autonomy."--Foreword

“Remarkably nuanced and thoughtful, this timely book takes readers on a riveting intellectual journey that brings into focus the complexities of the veil as a discursive, political, and material object. . . . Beautifully written and exhaustively researched, this book is a must read for novices and experts alike.”-- New Books Network

“A remarkable primer that guides newcomers and scholars alike through the range of issues, contexts, debates, and ethics of what is sure to be a continued controversy for some time to come.”--SCTIW Review

“A sweeping historical and sociopolitical overview and perhaps the most comprehensive one on veiling.”--Sociology of Religion: A Quarterly Review