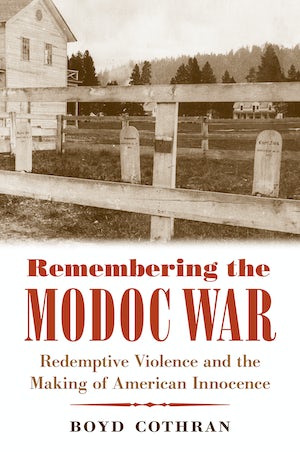 On October 3, 1873, the U.S. Army hanged four Modoc headmen at Oregon's Fort Klamath. The condemned had supposedly murdered the only U.S. Army general to die during the Indian wars of the nineteenth century. Their much-anticipated execution marked the end of the Modoc War of 1872–73. But as Boyd Cothran demonstrates, the conflict's close marked the beginning of a new struggle over the memory of the war. Examining representations of the Modoc War in the context of rapidly expanding cultural and commercial marketplaces, Cothran shows how settlers created and sold narratives of the conflict that blamed the Modocs. These stories portrayed Indigenous people as the instigators of violence and white Americans as innocent victims.

Cothran examines the production and circulation of these narratives, from sensationalized published histories and staged lectures featuring Modoc survivors of the war to commemorations and promotional efforts to sell newly opened Indian lands to settlers. As Cothran argues, these narratives of American innocence justified not only violence against Indians in the settlement of the West but also the broader process of U.S. territorial and imperial expansion.

Boyd Cothran is associate professor of history at York University.
For more information about Boyd Cothran, visit the Author Page.

"An original and important study of the long-term impact of one of the frontier wars in the American West."--Journal of American History

"[A] fascinating examination. . . . Succeeds in returning the conflict to a central place in the history of western settlement."--Pacific Northwest Quarterly

"For Cothran, reconsidering the Modoc War means more than setting the record straight. His historical work actively deconstructs contemporary narratives of American innocence and the ways they use history."--American Quarterly

“Masterful and evocative prose. . . . A sophisticated analysis of the construction of public memories and the role they play in sustaining settler colonial narratives of the nation and its relationships with Native people. . . . A model for all scholars seeking meaning in memory, conflict, performance, violence, and commemoration.”--American Historical Review

“His historical work actively deconstructs contemporary narratives of American innocence and the ways they use history.”--American Quarterly